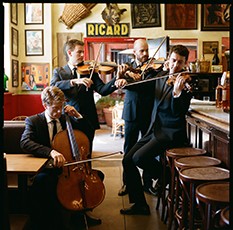 The Calder Quartet and soprano Barbara Hannigan will be the ones to open this new edition of the Series 20/21 held in the Auditorium 400 of the Museo Nacional Centro de Arte Reina Sofía. Based in California, the Calder Quartet has consolidated its reputation as a virtuoso of classical and modern repertoire. And with an expressiveness similar to that of the legendary Cathy Berberian, Hanningan will participate punctually in this project financed by several international entities, that revolves around the figure of the illustrious professor, Hungarian composer and conductor Peter Eötvös, who will present his new quartet entitled sirens cycle, commissioned by the CNDM in co-production with various prestigious European musical institutions.

The soprano Barbara Hannigan is recognized worldwide for her expressive force led by an exceptional technique.. Now she brings that same energy to her work as a director while continuing to work as a singer with the most important directors., como Simon Rattle, Kent Nagano, Esa-Pekka Salonen, Andris Nelsons, Yannick Nézet-Séguin, Kirill Petrenko, David Zinman, Vladimir Jurowski, Antonio Pappano, Pierre Boulez, Alan Gilbert y Reinbert De Leeuw. Gifted with a pure and warm voice, has reached a point of perfect control, intensity and versatility through a varied repertoire. She also has a vibrant stage presence., in opera or in concert. Highly requested in contemporary music, field in which he has offered more than 80 prèmieres, is no less brilliant as an interpreter of Baroque and Classicism, bringing freshness to old music and authority to new. She is a frequent guest of the Berlin Philharmonic, who commissioned Hans Abrahamsen a symphonic vocal cycle especially for her, the play Let me tell you, that has made his interpretations happen all over the world. In 2014 had the honor of being invited as Star Artist at the Lucerne Festival, where he headed, gave master classes and premiered an orchestral work written for her by Unsuk Chin. György Ligeti and Henri Dutilleux considered her their reference soprano. His moving interpretations of Ligeti's Mysteries of the Macabre have received worldwide acclaim., as well as his expressive fullness in Dutilleux's Correspondances. His recording of this work received the Gramophone Awards, Edison, y Victories of Music. Otros premios incluyen “Female Singer of the Year” (Opera world, 2013) y “Musical Personality of the Year” (Syndicate of the French Press, 2012). He has frequently worked with Pierre Boulez, George Benjamin, Gerald Barry, Salvatore Sciarrino, Pascal Dusapin and Hans Abrahamsen, among a long list of composers.