The privateer opens the dance season of the Teatro Real 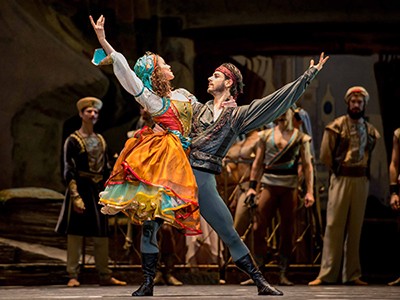 The Ballet of the Vienna State Opera will perform a new version of the historical choreography by Marius Petipa, created by Manuel Legris, current director of the company.

Holder Royal Theatre Orchestra perform live the score under the direction of Russian maestro Valery Ovsyanikov, specialist in the repertoire of the great classical ballets.

The dance season of the Teatro Real has the collaboration of the Loewe Foundation.

He Teatro Real prepares to receive between the days 11 Y 14 January on his stage at Ballet of the Vienna State Opera, who returns to Real with one of the most important titles in the dance repertoire, the corsair. The five performances that the Viennese dancers will offer us will serve to open 2017 and they will be the first dance sessions of the current season at the Teatro Real.

the corsair, one of the great titles of classical dance, was premiered in Paris in 1856 where, inspired by the romantic poem by Lord Byron The Corsair, composer Adolphe Charles Adams and choreographer Joseph Mazilier, with the collaboration of the French playwright Jules-Henri Vernoy de Saint-Georges in the elaboration of the libretto, put on stage the first version of this work.

Since then, this story of pirates and odalisques, of adventures inspired by the tales of Arabian Nights, has seduced great choreographers, who have found in this ballet a stupendous narrative opportunity, since it offers an infinite capacity to enlarge and reduce passages to the taste of each stylistic current. In the same way, the leading roles in the plot, have allowed the best dancers in the history of dance to endow them with a unique personality and make them, and with them, a true display of technique and style, with solo interventions and “pas de deux” adored by the public and always present at dance galas.

The version that can be enjoyed these days at the Teatro Real will be the one made by Manuel Legris, current director of the Vienna State Opera Ballet and one of the heirs of the French school where, at the Palais Garnier and under the direction of Rudolf Nureyev, was appointed star by The Paris Opera. Based on the choreography of Marius Petipa, and other later, Legris makes his first version of a great nineteenth-century ballet, whose premiere in the Austrian capital last spring was received with great enthusiasm by critics and the specialized press.

He Vienna seed ballet, popularly known as the Vienna State Opera Ballet, is currently living one of its best moments, due in large part, to the evolution of its dancers and the configuration of the company since the arrival of Manuel Legris in 2010. For his performance in Madrid, none of the company's great stars will be missing.

the corsair, divided into three acts and five scenes, It also requires a staging that accompanies the creative extravagance of the plot: Pirates ships, shipwrecks, palaces with captive odalisques… For that, Manuel Legris has had the collaboration of Luisa Spinatelli in the elaboration of the scenography and the costumes and the lighting of Marion Hewlett.

In the same way as the original choreography of the corsair has varied and grown since its first premiere, the original score by Adolph Adam has been transformed with added excerpts from other composers, depending on the versions and the specific needs of each new step. The one chosen by Manuel Legris, arranged by Igor Zapravdin, will be performed live by the Head of the Royal Theatre Orchestra, directed on this occasion by the Russian master Valery Ovsyanikov, renowned baton that has collaborated with great classical ballet companies, like the Mariinsky, the Royal Ballet or the Paris Opera Ballet. In the Royal Theater he left an extraordinary memory when he was placed in front of the Gala of the Stars of the Russian Ballet, in 2011, on the occasion of the celebration of the Spain-Russia Dual Year.

the corsair will join us at the opening of a very special year for the Teatro Real, what, immersed in the celebrations of its Bicentennial, will also commemorate twenty years since its reopening in October.