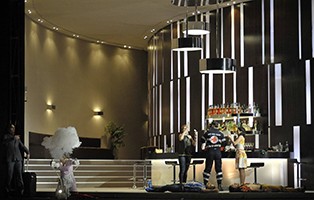 Così fan tutte, third and final collaboration between Wolfgang Amadeus Mozart y of librettist Lorenzo Da Ponte, arrive at Gran Teatre del Liceu under the direction of Damiano Michieletto, debuting at the Liceu with a daring proposal that is set in a luxury hotel. El dramma giocoso, which you can see the 20 al 30 of May, It is inspired by texts Boccaccio, Shakespeare Y Cervantes, and it has the musical direction of maestro Josep Pons.
Così fan tutte is a work with an acute social view of the time that addresses in a direct fight between the sexes, and specifically female infidelity. Mozart opera reflected in an immoral game about feelings and emotions of the protagonists: Fiordiligi and Dorabella the sisters, and Guglielmo and Ferrando promised respective. Not forgetting the Machiavellian Don Alfonso that entangles the whole plot with an irreverent bet, and its ally Despina, two sisters maid.

Michieletto presents, after working two other titles Mozart-Da Ponte, The Marriage of Figaro Y Don Giovanni, a So fan tutte reviewed, with a staging current and majestic, a daring costumes and scenery that stands by the rotational movement that takes the viewer to various rooms of a hotel where all possible entanglements occur. The Venetian director makes Don Alfonso fall on the entire weight of the element metateatral (the theater within the theater) and it makes you be present throughout the play sitting on the side of the proscenium, although the script does not require it.

Così fan tutte It premiered in January 1790 at the Burgtheater in Vienna and it was not until one hundred and forty years after he came to Liceu, although it could be seen at the Teatre de la Santa Creu in 1798. The last function So was the 30 of January of 2004 with addresses Bertrand de Billy (musical) Y Josep Maria Flotats (scenic). The Marriage of Figaro Y Don Giovanni are the two operas that also have the talent of Mozart and Da Ponte, a trilogy that began in the Viennese genius 1786 and he ended with So.

The Gran Teatre del Liceu offers two unique experiences during the performances of So fan tutte. With the collaboration of Hendrick's gin he will be installed in the Saló dels bar Miralls reproduction scenery of the opera so that attendees can feel protagonists during intermission, and once the function. Hendrick's offers the public to enroll in advance, tasting cocktails and gin and tonics surprising at the end of the representation. By 20 euros you can enjoy a unique evening in a “luxury bar”. Tickets will be on sale at the theater box office and on the website of the Liceu.

The Argentine illustrator Eduardo Relert, a whole and 3D guru streetart, after having exhibited their works in the streets of New York, Tokio, Roma, Mexico, among many other cities, proposes a facility in the historic Liceu lobby for people to interact while staying at the Gran Teatre. The play, original Relero, It is inspired by the operatic world and is built using vinyl arranged in a particular way under the concept of anamorfosis, a technique used to hide or direct attention specifically on something. The composition, that will be seen on a surface 6×6 meters on the lobby floor and the counter, it can display through the lenses of mobile phones and a camera located 1,75 meters that allow users to see the relief of installation on a plasma screen.