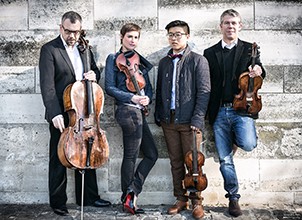 The second round of the cycle SERIES 20/21, of the National Dissemination Center Musical (CNDM), will present on Monday 24 October in the Auditorium 400 of the Reina Sofia Museum one of the quartets dedicated to the music of today's most respected internationally: he Diotima Quartet. On this visit to Madrid, which it is part of the tour celebrating the twentieth anniversary of the group, also they pay tribute to Henri Dutilleux, one of the great names of French composition, interpreting his only string quartet, Thus the night, to commemorate the centenary of his birth. Although almost all compositions are instrumental only Dutilleux has in its catalog this string quartet, custom work of Koussevitzky Foundation and the Library of Congress. premiered on 6 of January of 1977 in Paris, this classic genre has captivated those analysts who have crumbled bar by bar. To accompany this work will ring two pieces of Alberto Posadas, one of them, the quintet the reflection of the shadow premiere in Spain and with clarinetist José Luis Estellés like invited. This time will be the third time the prestigious French group is part of the CNDM programming focuses on contemporary music and the second which premieres a work by the composer vallisoletano. Access is free while the capacity of the room and all concerts of this cycle.

Founded in 1996 by graduates at the Conservatory of Music in Paris, Diotima Quartet is one of the most popular formations by the current international scene. Its name reflects the dual musical identity of the group: Diotima word is a reference to German Romanticism -Friedrich Hölderlin gave that name to the woman of his life in his novel Hyperion- although it is also a nod to the music of our time, recalling the work of Luigi Nono Fragmente-Stille, an Diotima.

The quartet has been a privileged partner of many important composers like Lachenmann, Ferneyhough, Boulez Y Hosokawa and performs numerous commissions to outstanding authors from all continents as Tristan Murail, Alberto Posadas, Gérard Pesson, Rebecca Saunders, Emmanuel Nunes, James Dillon O Pascal Dusapin. While it is maintaining an unconditional dedication to contemporary music, it is not limited to this repertoire. To jointly set great classics with new music today, concerts bring a new look on the works of the great composers, in particular, Bartók, Debussy Y Ravel, the last quartets of Beethoven and Schubert, composers of the Vienna School, and also Janácek.

The ensemble has performed regularly on the international stage and in major European festivals and concert cycles (Philharmonie and the Konzerthaus Berlin, Reina Sofia Museum in Madrid, Cité de la Musique de París, Wigmore Hall and Southbank Centre in London and Vienna Konzerthaus among others). Besides offering extensive tours regularly United States, Asia and South America, artistas in his residencia en el Théâtre des Bouffes du Nord of París desde 2012 a 2016.
His interpretations receive international critical acclaim, especially in Germany (for his Concerto for Quartet and Orchestra Schoenberg), in Spain and in France, where his discography has been awarded five "Diapason D'Or", two of which they received the "Diapason d'Or de l'année" for his recordings of works by Lachenmann and Nono in 2004 and works of American composers Crumb, Reich and Barber 2011.

His album with George Onslow -released Quartets by Naïve in 2009- was a huge success in the critics (Diapason "CD del mes" y "Diapason D'Or" 2010, "It 'Scherzo de ...) and consolidated its relationship exclusively with that label in a long-term collaboration and successful. further, Seal invitation Megadisc, the quartet made in 2015 a highly valued Livre pour quatuor recording of Pierre Boulez, revised by himself, which he received the "ffff" of Télérama and "Choc de l'année" magazine Classica.

In 2016 Diotima celebrates 20 his formative years with several special recordings: a chest of 5 CDs dedicated to the Second Viennese School (integral de Schoenberg, Berg y Webern) and the launch of a series of portraits of contemporary composers, the first of which is dedicated to Miroslav Srnka, to be followed by a monograph Gérard Pesson in collaboration with the WDR Symphony Orchestra. Besides these two recording projects, the next few years will be full of commitments for the quartet, including the complete Beethoven-Schoenberg-Boulez cycle at the Wien Modern Festival, concerts in various countries with the premiere of the new Enno Poppe quartet (Witten days for new music, Festival de Huddersfield, November Music’s-Hertogenbosch, Leuven Transit Festival, Paris Autumn Festival), Bartók's comprehensive string quartets in one night at the Théâtre des Bouffes du Nord in Paris and four international tours through South America, Japan, United States and the group's first tour in Russia.

The Diotima Quartet receives support from the DRAC (Regional Directorate of Cultural Affairs) y the Center-Val de Loire region, in addition to periodic aid from the French Institute, Spedidam, New Music in Freedom, FCM (The Fund for Musical Creation), the Adami Society, as well as private patrons. The quartet is currently formed by violinists Yun-Peng Zhao and Constance Ronzatti, the violist Franck Chevalier and the cellist Pierre Morlet.