The Cuarteto Quiroga and Martha Argerich at the Lyceum Chamber XXI 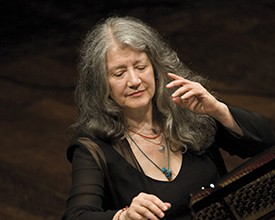 As that special concert outside of manure and co-produced with The Philharmonic, this first appointment Liceo de Cámara XXI It is the only one to be held in the Symphony Hall. The Cuarteto Quiroga returns once more to this chamber music cycle, this time with the illustrious pianist Argentina Martha Argerich. This address solo Partita No. 2 from Bach Quiroga and the Piano Quintet in E flat major of Schumann. This session will complete String quartet nº 1 what Brahms He dedicated to his friend the surgeon Theodor Billroth, who confesses that his op. 51 He had suffered an "instrumental delivery".

Martha Argerich He was born in Buenos Aires (Argentina) and he began playing the piano at age five with Vincenzo Scaramuzza. Considered a child prodigy, soon he began performing in public. In 1955 he moved to Europe and continued his studies in London, Vienna and Switzerland Seidlhofer, Gulda, Magaloff, Lipatti Y Stefan Askenase. In 1957 Competitions won the Bolzano and Geneva Piano, and in 1965 International Competition Chopin Warsaw. Since then, It has been one of the most prominent pianists in both popularity and skill. Argerich has stood out for his portrayal of the piano literature of the nineteenth and twentieth centuries. His extensive repertoire includes works by Bach Y Bartók, Beethoven Y Messiaen, as well as Chopin, Schumann, Liszt, Debussy, Ravel, Franck, Prokofiev, Stravinski, Shostakóvich Y Chaikovski. Although it is regular guest of the most prestigious orchestras, directors and music festivals in Europe, Japan and America, chamber music has a very important role in his musical life, and frequently acts and records with pianists Nelson Freire Y Alexandre Rabinovitch, cellist Mischa Maisky and violinist Gidon Kremer. As she herself says: “This harmony between a group of people gives me great strength and peace”. Martha Argerich has recorded with EMI, Sony, Philips, Teldec y Deutsche Grammophon, and many of his concerts have been broadcast on television worldwide. Among the many awards he has received throughout his career include the Grammy Awards for concerts Bartók Y Prokofiev, by Cinderella Prokofiev with Mikhael Pletnev and Concerts 2 Y 3 Beethoven with the Mahler Chamber Orchestra under the direction of Claudio Abbado; Gramophone Award "Artist of the Year, Best Album of the Year Concert Piano "by Chopin concert; Premio "Shock del Monde de la Musique" por su recital in Amsterdam; premio "artist of the year German Record Critics' en la categoría de" Mejor de Representación Solista Instrumental "; Sunday Times prize to "Album of the Year" and "Prize BBC Music Magazine" for his album Shostakovich (EMI, 2007). Since 1998 He is Artistic Director of the Beppu Festival in Japan; in 1999 He created the Festival and International Piano Competition Martha Argerich in Buenos Aires, and in June 2002 the "Progetto Martha Argerich" in Lugano. Among the many honors he has received should be highlighted: Officer of the Ordre des Arts et des Lettres (1996) and Commander of the Ordre des Arts et des Lettres (2004) the French Government; Academic of Santa Cecilia de Roma (1997); Musician of the Year by Musical America (2001); Order of the Rising Sun, Gold Rays with Rosette, the Emperor of Japan prestigious Praemium Imperiale and the Japan Art Association (2005).

Thursday 6 October 2016 to 19:30h. in the Symphony Hall of the National Auditorium in Madrid.