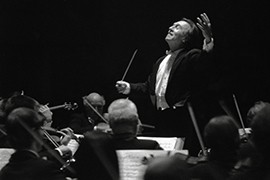 Daniel Barenboim has issued this statement from Seville, where he is to direct the rehearsal workshop and the concerts of the West-Eastern Divan Orchestra in Andalusia.

I met Claudio Abbado in the early fifties, when he was studying piano with Gulda at the Mozarteum in Salzburg. In 1956 we both participated in a conducting course in Siena and since then we have shared a close personal and artistic friendship. I have great memories of him, like his recent return to La Scala in Milan in 2012, when we perform together.

With Claudio Abbado we lose one of the great musicians of the last 50 years and one of the few musicians who maintained a very close relationship with the different musical genres. His dedication to contemporary music was especially remarkable, like his collaborations with composers like Nono, Ligeti and Kurtag and the interpretation of their works during his time as musical director of La Scala.

Perhaps the most significant, in any case, be the support he gave to young musicians with the creation of many important youth orchestras. In this sense, he was a pioneer working with new performers, motivated and supported them throughout their career. With this, he set an example to the world by maintaining that young musicians without experience can make music at the highest level when they work with the right attitude and commitment.. We must recognize this and much more.

Daniel Barenboim
Sevilla, 20 of January of 2014