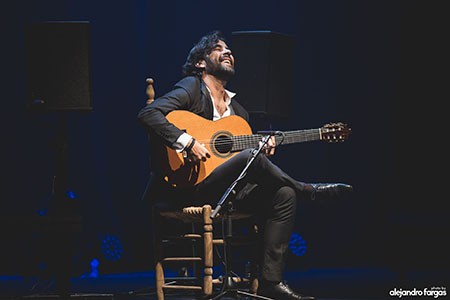 Daniel Casares he was born with a duende and he proves it with his guitar, that sounds original, different, with its own personality, reflecting that inner fury, that powerfully unleashes on its ropes. Performer and composer, arrive at Teatro Real to offer a work inspired by the sea that caresses his hometown and immerses us in the world of the south, MAGITERRÁNEO.

With 16 years is awarded with the prestigious mining staff of La Unión, becoming the youngest guitarist, till the date, in getting it. further, he wins the Jaén national guitar award and this opens the door for him to record his first album “Duende Flamenco” that same year.

There are countless collaborations between Daniel Casares and artists from other worlds of culture, like the mezzo-soprano Cecilia Bartoli -who asked her to accompany her, as guest artist, on his European tour on the occasion of the tribute to the diva María Malibrán- Alejandro Sanz, Dulce Pontes, toquinho, Anthony Orozco, and great flamencos like Juanito Valderrama, José Mercé or Miguel Poveda.

In MAGITERRÁNEO, the guitarist from Malaga returns to the south, where the Mediterranean and its magical poetry serve as inspiration. What matters is not the place where you leave or the port where you arrive, but the whole experience, the emotion and knowledge that one brings from the path. Beautiful melodies that bring us the perfume and essence of olive and laurel lands, joy of the palms, nuanced notes.

Some of his usual collaborators accompany him on this trip: Jesus Bachiller "Bachi", on the electric bass, Y Miguel Ortiz “Nene”, on percussion, both involved in the project Magiterraneo since its creation. With them, the dancer Peter Cordoba and the cantaor Roberto Jaén, both also to the palms.

The performances will be attended by, as guest artist, of the singer El Mati, winner of the Mining Lamp in 2019. His voice, with deep flamenco roots, It is one of the most relevant and demanded of the current panorama, and his open and multifaceted attitude has led him to participate in other disciplines, like jazz, and to explore new paths of cante with avant-garde music.