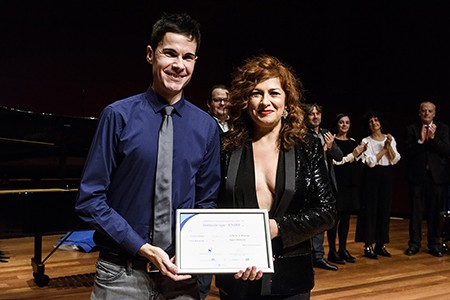 David Cantalejo Gómez (Bilbao, 1985) It is lifted winner XXX edition of the Young Composers Award Foundation SGAE - CNDM 2019 jointly announce the SGAE Foundation and the National Broadcasting Music Center (CNDM), and whose final held yesterday in the auditorium 400 the Museo Nacional Centro de Arte Reina Sofía in Madrid. The Bilbao won the first "Xavier Montsalvatge" award, endowed with 6.000 euros, for his work The night of Walpurgis and it also becomes resident composer Network Music Musical Youthes of Spain during the season 2020-2021. "This award recognizes the fruit of much effort and work daily, I receive a boost as composers forces us to improve ourselves ", He said Cantalejo. On The night of Walpurgis, a work that has won the award, David Cantalejo explained: "I wanted to recreate the atmosphere of the fires, the witches, the movement of fire, which it is central to the piece, how it enlivens and how the flames disappear, avoiding the use of programmatic sounds ".

Pilar Jurado, president of SGAE, He handed over the first prize to the composer and recalled as she won this award in 1997, after being a finalist three years ago: "This event demonstrates the commitment of the SGAE with symphonic creation, some awards are of great importance in the sector and, for a young composer, the recital today represents the best cover letter and a boost to the development of their careers ".

The ensemble KOAN 2, under the direction of José Ramón Encinar, it released the four compositions yesterday, Series in the cycle 20/21 CNDM. further, and as in every edition, SGAE Foundation will release a promotional album which will bring together the four finalists of the contest, in order to contribute to its further promotion and dissemination. The judge, which it was composed by composers Carlos Fontcuberta Llavata, Junkal Guerrero Langara, Alejandro López Román, Jesus Torres Ruiz Y Ana Vazquez Silva, these works has selected a total of 22 presented in competition.

Resident Composer Music Network
A first prize also adds Cantalejo designation as Resident Composer Music Network Jeunesses Musicales of Spain. The Bilbao and is commissioned three works of chamber music will be released and interpreted within the circuit Network Music during the season 2020 – 2021 and will be awarded 1.000 euros for each piece. "This is our bit to alleviate the difficulty of composers of contemporary music in general, and young people in particular ", Antonio Martin has expressed, Secretary General of Jeunesses Musicales of Spain after the delivery of the prize. Resident composer will choose three features of the selected Music Network that premiered by and construed in all recitals in this circuit offering more organized 200 concerts a year.

About the award
SGAE Foundation and CNDM this award held annually in order to stimulate the creation in the field of contemporary classical music among young creators up 35 years, contribute to social development and understanding of new languages, trends and modes of musical expression. Created in 1987 by SGAE, It has become one of the most important events of its kind, by their organization and thoroughness, the prestige of the performers and participants juries. Through its twenty editions, the award has served as a promotional showcase at the professional beginnings of some contemporary authors who now enjoy greater recognition, and whose works are common in international circuits dedicated to contemporary music.

Among the winners of previous editions include already established names in the panorama of the current composition, with international careers that show the good health of the Spanish musical creation: Charles Augustine, Mauricio Sotelo, José María Sánchez-Verdú, Jesús Rueda, Jesus Torres, Pilar Jurado, Gabriel Erkoreka, Ramon Humet, Juan Cruz Guevara, Jesus Navarro, Oliver Rappoport or Nuria Núñez, among many others, They have been involved in this indispensable appointment in the section of the ensemble composition nationally.

About the winner
David Cantalejo (Bilbao, 1985)
He studied composition at the Conservatorio Superior de Navarra Pablo Sarasate with Joseba Torre and piano at the Catalonia College of Music under the supervision of Eulàlia Solé. He has won first prize in several editions of the Composition Competition Durango City, among others, in addition to chamber music competitions as a member of the duo of flute and piano Iceberg. Part as composer and performer of the Center for Contemporary Music contemporary. In the year 2016, Navarra Symphony Orchestra Debuts Elegy of silence for accordion and orchestra, inside of the NAK Festival. Some of his works have been published by the publishing house Da_sh Editions and the association Silboberri.

About The night of Walpurgis
The inspiration of the work arises from the pagan festival of Walpurgis Night, held in regions of Central Europe on the night of the 30 April to 1 of May, where according to tradition witches conjured through dances and fire. Large bonfires formed from a spark, and it takes fan to not become extinct, They are generating me an image of a musical gesture that will being elaborated from different starting points along the seven sections of the piece, supported by a modal and rhythmic system, where the number 3 (and the aforementioned 7) They are constantly present. In my language show special interest in sudden changes of character, the insistence on the extreme registers of the instruments and so on opposite applied to different musical parameters as they are dynamic contrasts, the sound from the stillness collapse against the dissolution of a great texture, or against statism rhythmic maelstrom.