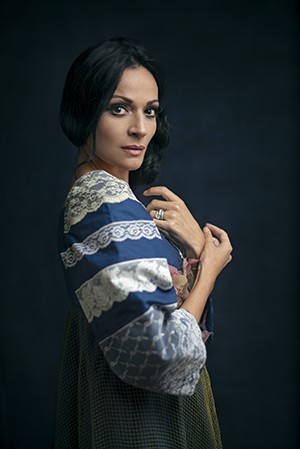 Canarian soprano Davinia Rodríguez debut this June in Teatro Campoamor of Oviedo and it does so at the closing of the Festival of Spanish Lyrical Theater of the Asturian capital with a character she knows well: Luisa Fernanda, the protagonist of the famous operetta of the same name by Federico Moreno Torroba libretto by Federico Romero and Guillermo Fernandez-Shaw. "The score of this zarzuela has nothing to envy to that of an opera", says the Spanish singer, the work which debuted at the Palau de Les Arts in Valencia 2014 sharing the stage with Placido Domingo. "The melodies are incredible and I have a couple of beautiful duets. in Oviedo, also debuting in this beautiful city, production will Emilio Sagi that I did in Valencia, a luxury of elegance and full of great theatrical ideas ", assures.

The montage, whose germ was born in La Scala of Milan 2003 and the following year took shape at the Washington Opera, It is one of the most acclaimed works of Sagi, a mythical name in the field of Spanish musical theater. "Collaborating with Emilio can approach a giant cultural heritage", says Davinia Rodríguez. "He always knows how to fix a scene, and with the utmost respect for the author and the performers ".

Among the future commitments of the Spanish singer he figures his return to Real Madrid Theater The pirate Bellini and his debut as Elisabetta Roberto Devereux Donizetti at the Los Angeles Opera with Placido Domingo and.