Rancatore Desirée sings La Traviata in Turin for EXPO TO 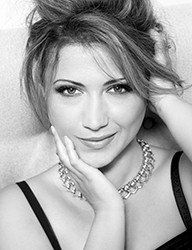 After the warm welcome received at the Teatro Regio in Turin, where, in April, played the role of Elvira from I Puritani from Bellini, soprano Desirée Rancatore returns to the Italian coliseum to play Violetta Valéry, the unfortunate protagonist of La Traviata from Verdi. The performances are part of the agenda of events organized in Turin on the occasion of the EXPO 2015, are the days 11, 16, 21 Y 25 of July. The production of Laurent Pelly It is the same that the soprano already sang in Palermo in 2013, now with the musical direction in charge of Francesco Ivan Ciampa.

For the Sicilian diva, it is not only one of the most important operas in the repertoire, but also, of your favorite character: “When I studied opera, in the third act I cried since I started to rehearse it with the piano”, enthusiastic states. “The history of La Traviata can not help but love. It is so strong and beautiful that it is impossible for it not to touch you.
Violetta is a fascinating character. First is a girl who only thinks about parties, in having fun and money. Then she becomes the woman who regrets what she has done and who is in love., and I've never been before. It even seems that his illness has disappeared. Finally there is the sick Violetta, shattered, Without hope, aware that he is dying. You could say that they are three completely different women, although actually it's about the evolution of the same character. And that change needs to be reflected in the singing, because it would be inconsistent for Violetta to sound the same in the first act as in the third. Rancatore comments that he is a character he has dreamed of all his life. “Ever since I started singing I have always thought about Violetta. My mother worked in the choir of the Teatro Massimo in Palermo and there I could see countless Traviatas. It is a role that has everything a singer could want: coloratura, subtlety, romanticism and great drama. And the story itself is fascinating. I read the Dumas novel and I loved it, and before facing the character I decided to read Piave's script several times, Without music, stopping at each sentence, in every coma, observing the particular way in which the characters express themselves in each situation. Only after this, when I already knew the memory script, I listened to the opera again with new ears, as if it was the first time I heard her”.

Desirée Rancatore debuted the role in 2013 at the Opéra de Monte-Carlo (Monaco); afterwards he has performed it at the Teatro Auditorio San Lorenzo in El Escorial (Spain), Musical Fortnight Donostiarra (Spain), Vienna State Opera (Austria) and Muscat Royal Opera House (Oman). After his Traviata in Turin, in october and november, it will be Violetta again, So in one of the cities that has won the most: Tokyo.