Desirée Rancatore regresa in Madrid con The Daughter of the Regiment 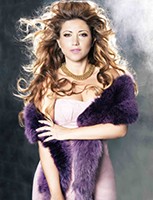 After a start to the season that marked his return to Japan with an acclaimed recital tour, Italian soprano Desirée Rancatore the course will start 2014-15 interpreting Daughter of the Regiment in his hometown, Palermo. In October the Italian diva will return once again to her delicious Marie from La fille du regiment, then to delight the Madrid public. This will be the third time that the singer from Palermo will step on the stage of the Teatro Real, and it will do so by recreating the stage direction of the outstanding regista Laurent Pelly, with whom he has collaborated on numerous occasions throughout his career, between them, in her debut in the role of Adina in the opera The elixir of love, as well as by working together on La Traviata at Massimo Theater from Palermo or in the recent new production of Le Comte Ory, from Rossini, in the Opera Lyon, show broadcast live to the whole world in streaming and recorded on DVD.

On his return to Madrid, Desirée Rancatore will perform at the Teatro Real on the days 21 Y 31 October 2, 5 Y 9 of November. On your future agenda are, among other commitments, his return to Paris with Opportunity makes the thief (Rossini, Théâtre des Champs-Élysées), Rigoletto in the Opéra Royal de Wallonie in Liege (Belgium) e I Puritani at Teatro Regio Torino (Italy).