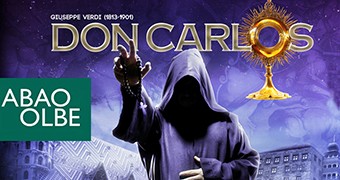 ABAO-OLBE (Bilbao Association of Friends of the Opera) opens its 64 season Don Carlos de Giuseppe Verdi. This custom title compound as Paris Opera to give greater solemnity to the annals of World Expo 1867 It is in the words of artistic director of ABAO, Child Cesidio, "Perfect a work". The following days 24, 27, 30 October 2 of November to 19:00h., sponsored by the BBVA Foundation, this piece goes on stage with which the tenth edition of the Tutto Verdi project also begins.

This romantic drama of heightened passions, idealized characters, fights, sacrifices, hopeless conflicts and suspense contains the four most deeply rooted and characteristic thematic elements of the Italian composer: the non-negotiable opposition between law and desire, the transcendental presence of the father, He denounces the dictatorship from liberal positions and an energetic anticlericalism. To give life to the protagonists of this lyrical tragedy starring the main characters of the court of Philip II, ABAO-OLBE has assembled a cast headed by the Italian tenor Giuseppe Gipali, who debuts in Bilbao to take over the role of 'Don Carlos'. At his side the Uruguayan soprano María José Siri, also debutant in the Biscayan capital, plays ‘Elisabeth de Valois’. the mezzosoprano Daniella Barcelona, whom we remember for his recent performance in Cavalleria Rusticana, poses voz to 'La Princesse Eboli'. The Verdean baritone Juan Jesus Rodriguez, triumphant ‘Jago’ in the Otello from last season, returns to ABAO to play 'Rodrigue, Marquis of Posa ’. The leading quintet closes with the Bulgarian bass orlin Anastassov like 'Philippe II, King of Spain'. Bass debuts complete the lineup Mika Kares as `The Grand Inquisitor’, soprano Ana Nebot like 'Thibault' and the bass Ugo Rabec like ‘Un Moine’ and the returns of the tenors Giorgi Melazde as ‘A Royal Herald’, Eduardo Ituarte like 'Le Comte de Lerme' and the soprano Irantzu Bartolomé as ‘A Voice from Above’.

The musical part is in charge of the Italian teacher Massimo Zanetti, who returns to Bilbao after directing with great success Madama Butterfly last February to lead the Bilbao Symphony Orchestra and get the most out of this complex score, one of the most elaborate and careful of Verdi, Possessor of a continuous and realistic musical discourse with an important orchestral weight rich in an abundance of colors and nuances. The choral part is, once again, task of Bilbao Opera Choir, with Boris Dujin in front. The performance of the ballet "La Peregrina" is performed by the Malandain Ballet from Biarritz making his debut in the Association.

On stage a new co-production of ABAO-OLBE with the Teatro de la Maestranza in Seville, The Oviedo Opera Foundation and the Tenerife Opera Festival is “the absolute top of Italian bel canto Giancarlo from Monaco, which differs from what could be seen in 2010 by including the complete act of Fontaineblau and the ballet of “La Peregrina”. The staging is elegant, suggestive, careful in the theatrical and colorful thanks to the lighting and sumptuous costumes.

In order to analyze, in advance the premiere, the most important aspects of this opera by Verdi, ABAO-OLBE has organized a conference, Free entry, which will take place on friday 23 October at 20.00 hours at the Hotel Ercilla. This time, Juan Angel Vela del Campo, music critic and director of the cultural project Tutto Verdi, discover the ins and outs Don Carlos.