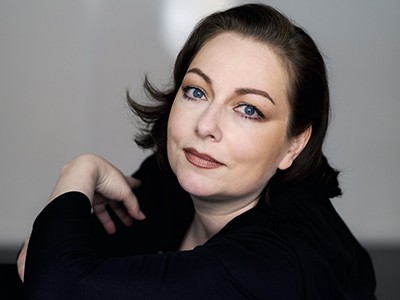 He Monday 25 February at 20 hours, National Dissemination Center Musical (CNDM) In co-production with the Teatro de La Zarzuela they present the German soprano at the XXV Lied Cycle Dorothea Röschmann junto to pianist Malcolm Martineau. The program they have prepared is truly exceptional and covers almost a century of German art song, since 1815, date on which the first of the Mignon Lieder Franz Schubert, a 1902, which is when Gustav Mahler finishes off the latest of his Rückert-Lieder. These two impressive cycles will be joined by songs by Robert Schumann and Richard Wagner. A program marked by intensity and that supposes a complex expressive adventure for those who sing or accompany and an aesthetic experience of the first magnitude for its listeners.. tickets, with a general price 8 a 35 euros, and are on sale at the box office of Teatro de La Zarzuela, INAEM theaters, www.entradasinaem.es Y 902 22 49 49.

Born in Flensburg, Germany, Dorothea Röschmann He was a member of the Ensemble of the Deutsche Staatsoper Berlin, where, in 2016, received the title of Kammersängerin. Closely associated with the theater, there sang roles as Agathe, Ännchen con Mehta, Nannetta with Abbado, Eva, Elsa, Pamina, Fiordiligi, Susanna, Zerlina, micelle, Donna Elvira, Countess Almaviva with Barenboim and the Marschallin with Sir Simon Rattle. In 1995 made her debut at the Salzburger Festspiele as Susanna with Harnoncourt to great success. There have been numerous times that he has returned to the festival to sing Donna Elvira, condesa Almaviva, their, Servilia, Nannetta, Pamina, Florinda and Vitellia, with directors like Abbado, Harding, Mackerras y Von Dohnanyi. In 2014 returned to the festival to sing Florinda in Fierrabras with Ingo Metzmacher and in 2016 to the Easter Festival to play Desdemona in Otello with Christian Thielemann. At the Teatro alla Scala in Milan the Countess and Donna Elvira sang on tour with the Bolshoi company and Daniel Barenboim. In the Wiener Staatsoper she has played Countess Almaviva, Susanna, Marschallin y, in 2016, He returned to debut the role of Jenufa. En la Bavarian State Opera, in Munich, sang Zerlina, Susanna, Ännchen, Marzelline, A mother Trulov, Elvira and Rodelinda. In theaters of Europe he has sung at La Monnaie in Brussels as Norina and at the Théâtre de la Bastille in Paris as Countess Almaviva and Pamina. Susanna sang at the Metropolitan Opera in New York, Pamina, Elvira and Ilia with Levine and, in the Royal Opera House in London, her roles have included Pamina and Fiordiligi with Sir Colin Davis, Countess Almaviva with Sir Antonio Pappano and Donna Elvira. She has sung the title role of Theodora at Carnegie Hall with Harry Bicket and The English Concert; Fist scenes by Daniel Harding y the Berliner Philharmoniker; a European tour with Mariss Jansons and the Royal Concertgebouw Orchestra with Symphony No. 4 Mahler; Seven Early Songs, the mountain, con Marc Albrecht y la Rundfunk Sinfonieorchester Berlin, y Dido and Aeneas, Purcell, en el Carnegie Hall con Les Violons du Roy.

As a renowned interpreter of lieder, He has performed at the Wigmore Hall in London, the Concertgebouw in Amsterdam, la Vienna Konzerthaus, and in Antwerp, Lisboa, Madrid, Colonia, Brussels, Oslo and Edinburgh festivals, Munich and Schwarzenberg. He sang with Daniel Barenboim at the Schiller Theater in Berlin and with Mitsuko Uchida at the Lucerne Festival, at Wigmore Hall in London and on a tour of the United States that culminated in a recital at Carnegie Hall in New York. Dorothea Röschmann has participated in two previous editions of the Lied Cycle: VIII (01-02) y XV (08-09).