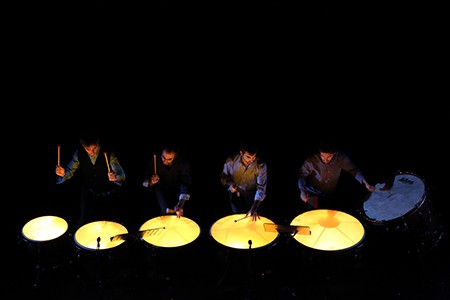 The Portuguese side Drumming Percussion Group will complete the program with two premieres of Luis Tinoco and Jesus Rueda, Resident composer CNDM this season

Drumming It is considered the first masterpiece of musical minimalism

The concert, as every cycle, free entry has limited capacity.

He Monday 14 January at 19.30 hours, National Dissemination Center Musical (CNDM) It presents the first appointment 2019 of his cycle Series 20/21, music focused on today, at audience 400 of the Museo Nacional Centro de Arte Reina Sofía (Nnchhahris) from Madrid. This time, the portuguese set Drumming Percussion Group will perform the play by Steve Reich, Drumming, together with two absolute premieres by the Portuguese composer Luis Tinoco and the Madrid-born Jesús Rueda, CNDM Resident Composer for the season 2018/2019. Access to this concert, and the rest of the cycle programmed in the Auditorium 400, will be free until the capacity of the room.

The first masterpiece of minimalism

According to the musicologist Antonio Gómez Schneekloth: “Fellow by the Institute for International Education, in 1970 American composer Steve Reich attended percussion courses at the Institute for African Studies at the University of Ghana in Accra. There came the idea of ​​writing Drumming, "The first masterpiece of minimalism", according to musicologist K. Robert Black, Minimalistic who also wrote the book (London, Phaidon). Drumming It is a transitional piece between Reich's more austere early compositions and later ones characterized by the use of more open forms and structures.. Again according to Schwarz, Reich uses three techniques for his nonet at that time unpublished: the gradual replacement of attacks by silences (or viceversa) within a rhythmic cell that repeats constantly, the simultaneous combination of different instruments (stamps) in homophone textures and the incorporation of human voices imitating the sounds of percussion instruments. In the words of Steve Reich: «Drumming Part I for small patch instruments it starts with a pulse of twelve regular attacks from which the single rhythmic cell of Drumming. Once established, this is gradually accelerated in one of the voices while in the others it remains constant…». This process produces a kind of asynchronous texture imitated by many other composers than in the years after Drumming They created a huge trail of minimalist epigones that even today produces new followers, as if it were a religion.”