The Theatre Royal is on the subway 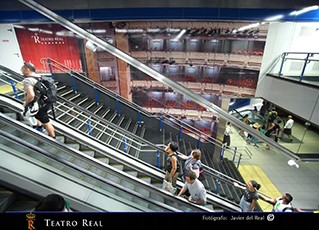 The Community of Madrid about the Teatro Real to users of Madrid's Underground with the renewal of the image of the Opera station that exhibits, from today, vinyls with images of the theater and the main works performed in recent seasons in order to emphasize the relationship of the season with the cultural activity of the environment and commemorate the 200 years the Royal Theater and the centenary of the Madrid underground.

This initiative is part of the framework collaboration agreement signed between Metro de Madrid and the Teatro Real that seeks, Besides, promote the use of public transport when traveling to attend cultural events and, especially, to those held at the Real. This was highlighted this morning by the president of the Community of Madrid, Cristina Cifuentes, who, accompanied by the president of the Teatro Real, Gregorio Maranon, has visited the station to see the final result of the Opera customization work. The new decoration has meant the performance in more than 500 square meters of the station, affecting the lobby, hallways and stairs.

Under the title "This is Opera", the user of the subway will have the sensation of entering the interior of the main hall of the Theater and will enjoy the exhibition of vinyls that recall some of the most emblematic titles of the Royal Theater, as La clemenza di Tito O Le nozze di Figaro, from Mozart; The Barber of Seville, from Rossini, Y La traviata O Don Carlo, from Verdi, alongside contemporary titles such as L’Upupa, from Henze or the show Life and death of Marina Abramović, in which four of the most relevant names in international culture came together: Robert Wilson, Marina Abramović, willen Dafoe Y Antony.

With them, also include the world premieres that have taken place in the recent stage of the Royal Theater, which will soon celebrate the twenty years of its reopening, with which homage is paid to the Spanish composers of our time, as is the case of Don Quixote, from Cristobal Halffter, Y The public, from Mauricio Sotelo.

further, he Museum of the Caños del Peral, located in the same station, hosts a sample of part of the costumes used by the artists in different representations. From the dress of the protagonist of the children's opera Dulcinea, by Sotelo, based on Don Quixote, to the Punta and heel dance shows, from the company of Antonio Gades and Bestiary, in which the composer Miguel Ortega joined singing and dancing.