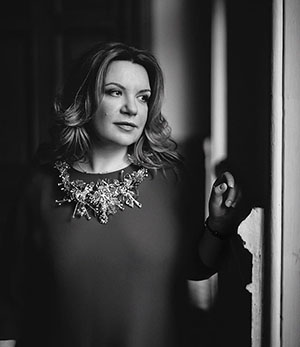 The person in charge of inaugurating the cycle will be the Belarusian mezzo-soprano Ekaterina Semenchuk on his second visit to this musical series. Semenchuk will be accompanied by Semjon Skigin on piano to offer a monographic program of two series of Russian songs: Farewell to Saint Petersburg by Mihail Glinka and Songs and Dances of Death de Modest Mussorgski. Tickets for all the concerts of the Lied cycle scheduled for this fall, with a general price 8 a 35 euros, They are on sale at the box office of Teatro de La Zarzuela, INAEM theaters, www.entradasinaem.es and on the phone 91 193 93 21.
Ekaterina_Semenchuk
Russian melancholy
According to musicologist Cristina Aguilar: “Melancholy never was a sign of national identity as clear as in Russia. Fyodor Dostoyevsky held: "The really great men must experience, as far as I know, great sadness ". Music is sheltered under the broad umbrella of protiazhnaya (lingering), popular genre in which Russian composers were inspired by the eighteenth to twentieth centuries. Or so they wanted us to believe, because its characteristic outline melismatic which today is more about Kyrgyzstan or Kazakhstan- had very little space. But what Russian authors craved that feeling was feeding glimpse believed in the popular song: an ancient sadness emparentaba with that "great Russian soul" of Dostoyevsky, Tolstoy the Gogol, similar to the drippings of Soviet buildings”.

Critic Santiago Martín Bermúdez comments: “Farewell to Saint Petersburg not so much a cycle as a series of songs in sequence not quite dramatic. In their Memories, Glinka says that a bolero came to his mind and that he asked Nestor Kukolnik to provide him with text for that idea., and so the cycle was emerging. British expert David Brown disdains this cycle as unworthy of Glinka. And he reproaches him for a lack of ‘Russianness’, as if asking Glinka ‘Be Russian enough’. Mussorgsky wrote more than forty songs as single pieces. Only seventeen are grouped in cycles like Los Songs and dances of death (1875-1877), which sets poems of Prince Golenshchev-Kutzov to music. Apparently, the composer was the one who suggested the poet to write the texts, that there were going to be eight, but that they remained in four due to their personal estrangement with the prince at a certain moment. It's about descriptions of death, with an undisguised dread that, for moments, can result in fascination. Throughout these sequences, death appears sly or disguised as a benefactor; looking like a seducer or puffed up by her success. Never fierce, never violent in itself, although on one occasion the war gave him a tremendous triumph”.

The excellent vocal qualities of Ekaterina Semenchuk (Minsk, 1976) have reaffirmed their reputation as a brilliant singer in the opera world for their exceptional range and unmatched technique. He has sung on stages such as the Metropolitan Opera in New York, the Paris Opera, the Mariinsky Theater, Carnegie Hall, el Suntory Hall, the Los Angeles Opera, La Scala, etc, together with teachers like Valeriy Gergiev, James Conlon, Nicola Luisotti, Zubin Mehta y James Levine, among others. In the concert field he has interpreted the Requiem by Verdi with James Gaffigan, Valeriy Gergiev, Gustavo Dudamel, James Levine, The plaintive by Mahler at the Ravinia Festival, he Requiem by Dvorak with L’Orchester de Paris and James Conlon, Giovanna D'Arco by Rossini and The Death of Cleopatra by Berlioz with the Lucerne Symphony Orchestra conducted by James Gaffigan. Ekaterina regularly collaborates with great pianists such as Semion Skigin, Julius Drake, Dmitry Efimov, Julius Drake y Helmut German.
His repertoire also includes the Stabat Mater by Pergolesi and Rossini, the Missa Solemnis Beethoven, the Symphonies 2, 3 Y 8 Mahler, Pulcinella Y Oedipus Rex Stravinsky, Hour of Soul (Percussion Concerto, mezzo-soprano and orchestra) de Gubaidulina, From Jewish Folk Poetry Shostakovich, Kindertotenlieder Mahler, The summer nights by Berlioz and Scheherazade Ravel, among other. Semenchuk is a consolidated studio artist with multiple recordings, among which her Jocasta stands out. (Stravinsky: Oedipus Rex) under the direction of Valery Gergiev with the Mariinsky Orchestra and Choir for the Sony Classics label and Amneris in Aida de Verdi with Sir Antonio Pappano and the Orchestra of the National Academy of Santa Cecilia for Warner Classics, interpretation that is considered “one of the best recordings for that role” (Gramophone Magazine).