El Amir, along the roads of Andalusia, in Real Flamenco 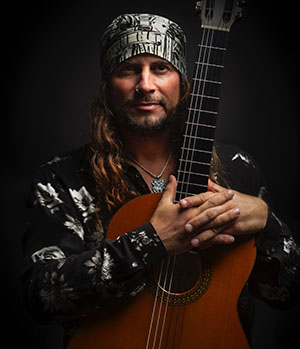 In full success for his participation in the musical production of the latest James Bond film, no time to die, arrives at the Teatro Real El Amir, one of the most recognized flamenco guitarists of his generation to inaugurate the fourth season of Real Flamenco and present your new job, Andalusia.

Virtuoso, creative and explorer of new flamenco airs, El Amir now travels through the eight Andalusian provinces creating a sound painting full of landscapes and feelings, portrait of people, scenes and emotions that have flamenco at the center of their culture.

Born in Freiburg, in a palestinian family, Amir John Haddad, El Amir, He has been playing the guitar since he was seven years old., he has been on stage since he was twelve and is considered one of the most talented and personality flamenco guitar soloists.

A little over three years ago, his virtuosity caught the attention of the composer Hans Zimmer, who found in him the creative and versatile musician with whom to collaborate on his work for soundtracks. Since then, has been one of the protagonists of the show The World of Hans Zimmer and is the star performer of the soundtrack of the latest film by James Bond, by becoming the first flamenco guitarist to participate in a soundtrack of the saga.

At the Teatro Real he will perform surrounded by great artists. He will be accompanied by the percussion of Israel Katumba and the bottom of Jesus Bachiller "Bachi", with the special participation of Karen Lugo, in the dance, Y Rafael de Utrera, in cante, as guest artists.

Karen Lugo is one of the new references of Spanish dance. of Mexican origin, restless and innovadora, his dance is flamenco on all four sides. As a choreographer, she has been awarded the First Prize for Flamenco dance at the Almería International Festival., the First Prize for Choreography at the Contemporary Flamenco Festival of Finland and the Third Prize for Choreography at the XVII Contest of Spanish Dance and Flamenco in Madrid.

Rafael de Utrera has, among others, the First Prize of Síguiriyas in the Cante de las Minas Contest, and has in his career known works with Paco de Lucía, Vicente Amigo or Tomatito. She has also sung for the dance of outstanding figures such as Cristina Hoyos, Joaquin Cortes, Antonio Canales, the Andalusian Dance Company, Israel Galván, Farruquito or Eva “La Yerbabuena”, to name a few.

This fourth edition of FLAMENCO REAL will feature the 100% capacity and will recover its original format, like a tablao. Each show will be offered on two consecutive days, the first at 19.00 hours and the second, with double session, to 19.00 and to the 21.00 hours.