THE BALLET Julio Bocca, in the Maestranza 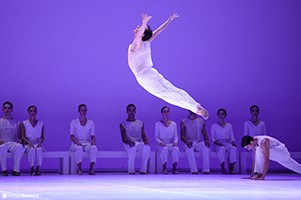 This company acts, next Monday 20 October 2014, first in the Teatro de la Maestranza and within the Dance Cycle that, this season, is sponsored by “the box”.

The National Ballet Sodre-Uruguay, directed by the great dancer Julio Bocca and one of the most prestigious dance companies in Latin America, is presented for the first time at the Teatro de la Maestranza with the choreography that Maurizio Wainrot created for the most famous written oratorio, maybe, throughout the history of music: The Messiah of G. F. Haendel.

The National Ballet Sodre-Uruguay, founded in Uruguay in 1935, It is considered one of the great Latin American dance houses. In the years 50, the Ballet received the impulse of numerous figures of the Argentine dance, who founded the Uruguayan dance school and led the trajectory of the Ballet. Today Julio Bocca, charismatic dancer who has been acclaimed as a guest artist in the world's most prestigious dance halls -Royal Ballet, Bolshoi, Kirov, Scala…-, directs the company from 2010 promoting its international development.

The Messiah, with choreography by Mauricio Wainrot, music by g. F. Haendel, scenery and costumes of Charles Gallardo and lighting by Eli Sirlin, was included in the repertoire of the Ballet Nacional Sodre-Uruguay after the premiere last June at the Auditorio Nacional del Sodre.