The Paris Opera Ballet returns to the Royal Theater 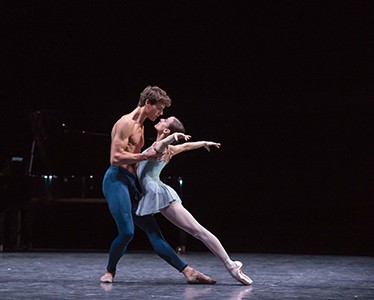 In the year that has just begun the Paris Opera will live immersed in the celebrations of its 350 anniversary. At this time, when the memory rescues the career of one of most emblematic institutions of European culture, he Teatro Real will be the first stage the Paris Opera Ballet will visit on 2019, to offer five functions, between 21 and the 26 from January, with the participation of some of its star dancers.

The reunion program with the public in Madrid will consist of choreographies George Balanchine, Jerome Robbins Y Hans van Manen, without regard to chronological order. Thanks to the look and inspiration of these artists, We find some of the symbols of identity of a school, It is one of the brightest of the classical tradition, and while remaining faithful to it, It has incorporated new languages, technical and character.

The show will feature the musical interpretation of the Head of the Royal Theatre Orchestra, under the direction of teacher Maxime Pascal, and the participation of the pianist Elena Bonnay in Sonatine Y three Gnossiennes, cellist Aurélien Sabouret, in A suite of Dances, and pianist Vesela Pelovska, in Ruby.

From George Balanchine, one of the most influential names in the world of dance, pioneer and founder of modern ballet, junto a Lincoln Kirstein, del New York City Ballet, two works will be interpreted: Sonatine Y Ruby, both created for the American company and incorporated into the repertoire of the Paris Opera Ballet.

The first one was released in spring 1975 to commemorate the centenary of the birth of Maurice Ravel, whose work, Sonatine for piano in F major, takes its name. RUBIO, located between the French school and the Russian school, choreographed on Capriccio for piano and orchestra by Igor Stravinsky, It represents America in the eyes of Balanchine, dazzled the years by musical 30 and improvisations of jazz. This is part of ballet choreography Jewels, which could be completed in 2004 in the first visit of Paris Ballet Teatro Real.

Known by the general public for his creations for the American musical with titles like West Side Story (1957) O The King and I, Jerome Robbins It is one of the most famous dance choreographers of the twentieth century by ballets as those who are part of this program: Afternoon of a Faun Y A suite of Dances.

His choreography historical Afternoon of a Faun - premiered by the New York City Ballet 1953- will be responsible for opening the program. Conceived as a chance encounter between two young dancers, enveloped by Prelude to the Afternoon of a Faun Claude Debussy, and a clear look at the work of Nijinsky, remains today one of the two pax most appreciated by their expressiveness, sensuality and originality, which converts the "fourth wall" in a mirror in which the dancers look.

The same innovative Robbins is in A suite of Dances, where violoncelista –Aurélien Sabouret the functions of the Teatro Real-, interprets some extracts Suite for solo cello the JS Bach, while a dancer listening to music and moves intuitively. Both artists interact starting with the indifference of an improvisation, advancing playful way, from relaxation to the academic style, to achieve an infinite number of steps and variations path, whose execution speed, It makes it extraordinarily complex. It was released by Mihail Barysnikov in 1994 State Theater in New York.

Artistic production Hans van Manen has more than 120 ballets, each with an invoice and a signature plot that make unmistakable. Clarity of structure and a refined simplicity are the elements of a form of creation that have earned him the popular name “Mondriaan of dance”. How Van Manen portrays the man and the woman, human relationships and sexuality, are releasing in all aspects, something that is evident both in his choreography and his photographic works.

three Gnossiennes, named for the score of Erik Satie, It is the latest of the choreographies that make up the program and, curiously, which it is interpreted in the central part thereof. Released in 1982, He incorporated the repertoire of Paris ballet 2017, with the arrival of Aurélie Dupont at the address. This is the most abstract creation night, austere, modern, but possessed of a fine-tuned sense of rhythm and an eloquent phrasing reminiscent of the neoclassical aesthetic of the two accompanying teachers in Madrid, George Balanchine y Jerome Robbins.

In addition to these important representations, the next Friday, 22 from January, to 20.30 hours, will take place at Sala Gayarre Teatro Real, a new session approaches, this time, around the Paris Opera Ballet, by the critic and writer Roger Salas.