“The Barberillo Lavapies” at the Teatro de la Zarzuela 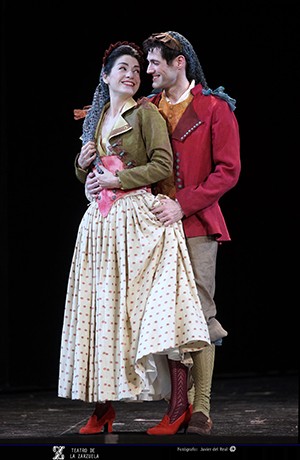 This year marks 145 since The barberillo Lavapies' It will premiere at the Teatro de la Zarzuela way back 1874. Throughout this time the work of Francisco Asenjo Barbieri, with magnificent libretto by Luis Mariano de Larra (son of romantic intellectual insightful 'Figaro'), He has ridden three different centuries with the same fate: the pleasure of the public, of music lovers, Theater enthusiasts height. a feast of musical theater 28 March to 14 April will again brighten the coliseum plaza de Jovellanos with a new production, thirteen years after the last presentation of the title in this scenario. They will total 14 functions, of which, Friday's 12 of April (20h00), It will be broadcast live via Facebook, YouTube and the website of the Theater.

But the interest and expectation that has caused this Barberillo to the musical and literary material it an incontestable masterpiece should not be only; one of the most fun and joyous works of lyrical repertoire that has remained on the scene to this day as an emblem of Spanish lyric. Also it achieves quality event for those responsible for her feet this time. Stage director and adapter of the text is none other than Alfredo Sanzol, National Dramatic Literature Award 2017 and one of the essential names in the scene today.

Musical direction of international maestro José Miguel Pérez-Sierra will be responsible, that as usual he will give verve to the pit in front of the Community of Madrid Orchestra (Titular del Teatro). The production features the unique scenery and colorful costumes Alejandro Andújar, the always revealing Pedro Yagüe lighting and choreography (so important in this title) Antonio Ruz, National Dance Award 2018, who with the poetry of movement contributes to the work again become current and modern.

They will, Besides, two deals that sing the great work of Barbieri: Lampara, the Barberillo which aims to Paloma seamstress, who is immersed in a political intrigue without knowing how or why, It will be played by baritones Maybe Borja and David Oller; Paloma will be played by the mezzosopranos Cristina Faus and Ana Cristina Marcos; the marquise del Bierzo, intriguing policy that puts everyone in the mess, love and turn the suffering Don Luis de Haro, It will be sung by sopranos María Miró and Cristina Toledo; tenors Javier Tomé and Francisco Corujo They give life to Don Luis, who suffers political and loving disdain of his beloved Marquesita; the bass David Sanchez will be the conspirator Don Juan de Peralta, and also under Abel Garcia, Don Pedro de Monforte, defender of law and justice.

He accompanied on stage this double cast Holder Choir Teatro de la Zarzuela, and ten dancers and eight actors who also dance in each and every one of the dance numbers.

Music & Performance. Validity, comedy, Beauty José Miguel Pérez-Sierra, who describes the work as "one of the peaks of the genus', He argues that collaboration between Larra and Barbieri is more interesting, because "together create a work
where you live, breathes Madrid. A dieciochesco Madrid on plot and nineteenth-century in music, but with a timeless perfume that makes this zarzuela still have full effect '.

Alfredo Sanzol, meanwhile, stresses that "the comic adventures and function tone is what we have enhanced never forgetting that both go together in search of beauty". Stage director points in each of his works to the idea that "the depth of life and difficult conflicts need the vision of liberating comedy to find solutions".

Barbieri and mixed Larra a popular frame, Loves the Lamparilla and Paloma, sentimental dalliance with two aristocrats, the Marquesita Star and Don Luis, and all with a political background: the forced transition from one government to Floridablanca Grimaldi. It is a thematic model that had already used Barbieri Playing with fire, The diamond crown or Pan and bulls, but the text, written in verse-Larra is filled with adventures, intrigues, politics, love and humor, It is functioning as if it had been written in these days running.