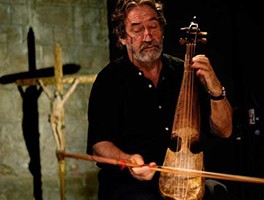 as part of the program CIRCUITS, present in fourteen Spanish cities. the cycle of 6 concerts, co-produced by the City Council of Oviedo, will start on 1 April and will run until 20 May 2014 in the Chamber Hall of the Principe Felipe Auditorium.

With a wide selection of music from the 16th to the 18th centuries as the central axis, some outstanding names of current historical music will pass through the Asturian capital, like the spanish Jordi Savall, the Retreat, Antiqva form, the Baroque Orchestra of the University of Salamanca Y Musicians Your Highness, who will be joined by the great Italian soprano Anna Caterina Antonacci accompanied by the The Accademia degli Astrusi, at his presentation in Spain.

In line with the music program, of the 4 April to 14 May the Conservatory of Music and the University of Oviedo will host the course "Music in the Spanish Baroque".

Baroque Spring focuses its attention on the music of that historical period, following the current line of recovery and development of that repertoire by the CNDM and great soloists and ensembles inside and outside our borders. According to Cosmo Marina: “The music that is not on stage, live and interpreted, ceases to exist and remains in scores that languish on the shelves of archives and libraries.” A) Yes, the cycle recovers, commissioned by the CNDM, 15 works by great authors of the time such as José de Nebra, Carl Philipp Stamitz,Juan Francés de Iribarren, José de Torres and anonymous Spaniards and Bolivians, of which 9 are also premiere in modern times.

The cycle will open with one of the most important Spanish musicians in the world, Jordi Savall. A viola da gamba will perform a fantastic program that includes works by J.S.. Bach, Ferrabosco, Playford o Demachy, among other authors, under the title of Les Voix Humaines. After Jordi Savall, the Asturian group Forma Antiqva will perform, who has his residence in the Principe Felipe Auditorium, equipment in which he has recorded his latest album and in which, annually, offers a concert in the cycle of the Symphony Hall. This time the training, led by Aaron Zapico, will be accompanied by one of our reference sopranos in the baroque field, Maria Espada. Together they will offer a program of colonial music that includes sheet music recoveries and the premiere in modern times of some of them, all by Spanish and Italian composers with works preserved in the cathedral archives of Guatemala, Lima, Lisbon or Mexico. ¡Albricias, oh mortals!, is entitled the proposal of La Ritirata. Under the direction of Josetxu Obregón, the soprano María Eugenia Boix and the mezzo-soprano Nerea Berraondo will go through an eclectic evening that starts with Domenico Scarlatti and continues with others such as Antonio Caldara, Santiago de Murcia, Andrea Falconieri, Marco Uccelini or Juan Frances de Iribarren, among others. A very different profile will present Luis Antonio González and his group Los Músicos de Su Alteza, also with Boix who will share the stage with the soprano Olalla Alemán and the tenor José Pizarro. José de Nebra will be the absolute protagonist. With the title of It is the day of Corpus, such a big day, carols and scenes of autos sacramentales are the backbone of the proposal. Other Spanish formation, the Baroque Orchestra of Salamanca under the direction of Enrico Onofri, will bet on the recovery of the Symphonies numbers 4 y6 del opus 13 by Carl Stamitz, preserved in the archive of the music chapel of the University of Salamanca, in addition to interpreting Mozart. and as a closing, the magnificent Italian soprano Anna Caterina Antonacci with the Accademia degli Astrusi, under the direction of Federico Ferri, will perform such well-known operatic arias as Monteverdi’s L’incoronazione di Poppea.

Under the title "Music in the Spanish Baroque" of the 4 April to 14 of May, at 6:00 p.m., the Principe Felipe Auditorium will host a course, following the cycle of concerts, co-produced by the Conservatory and the University of Oviedo. The aim is to introduce students to the top, in baroque musical manifestations, for which three interesting conferences have been scheduled by three of the directors involved in the cycle: Aarón Zapico (4 of April), Josetxu Obregón (21 of April) and Luis Antonio Gonzalez (14 of May).

With the idea of ​​encouraging the public to get even closer to baroque music, established a reduction of 20% discount on subscriptions for the six concerts, for sale until 25 March at the box offices of the Campoamor Theater and the Principe Felipe Auditorium; on the website www.cajastur.es and on the phone 902 106 602. With an overall price of 15 €, Tickets for the concerts will go on sale from 28 March on the same channels as subscriptions. To also encourage young people's access to early music, accredited students of the University of Oviedo, of the Superior Conservatory of Music of the Principality of Asturias, from the Higher School of Dramatic Art, pensioners and organized groups (acquiring these locations, only on the day of the concert, if any) will enjoy a discount of 30% on the general ticket prices, with tickets to 10,50 €.