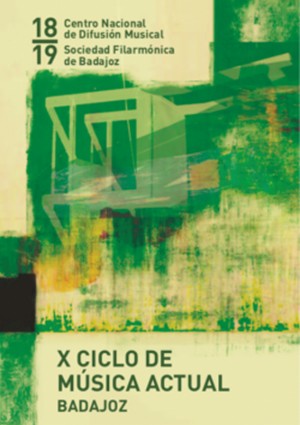 This edition of the co-production between CNDM and the Philharmonic Society of Badajoz presents twelve concerts and ten absolute premieres, October 2018 to March 2019.

The X Current Music Cycle, co-produced by the Philharmonic Society of Badajoz and the National Center for Musical Diffusion (CNDM), will take to the capital of Badajo a dozen of outstanding groups specialized in current music that will, from the 23 from october to 8 March 2019, twelve concerts, ten absolute premieres and eight pedagogical activities. All concerts will have free access until the capacity of the space is completed, except for the one offered by the Extremadura Orchestra at the Badajoz Conference Center.

For the fifth year in a row, the city of Badajoz participates in the CNDM season, center dependent on the Ministry of Culture and Sports, and it does so through this cycle of music that the Philharmonic Society of Badajoz created ten years ago as a space for the dissemination of current music, becoming in a short time a benchmark inside and outside Extremadura. Collaboration with the CNDM has made it possible to increase the number of concerts and world premieres, at the same time that it has led to some composers from Extremadura or living in Extremadura to have released their works, as María José Fontán, Jose Ignacio de la Peña, Jeronimo Gordillo, Ines Badalo, Leandro Lorrio and Francisco Novel Sámano. The cycle also has the support of the Junta de Extremadura, the Badajoz Provincial Council and the CB Foundation.

The presence of the renowned Hungarian composer and conductor Peter Eötvös in Badajoz and the absolute premiere of his work Joyce (co-commissioner of the Philharmonic Society and the CNDM) will be one of the highlights of this edition. He Cuarteto Quiroga, brand new winners of the National Music Award 2018, together with the renowned clarinetist and composer Jörg Widmann will be in charge of giving life to this piece the 10 February in the Badajoz Provincial Council. Before the concert, Eötvös and Widmann will offer an introductory talk in a meeting with the public at the Conservatorio Superior de Música ‘Bonifacio Gil’ Badajoz.

This tenth anniversary proposes a diverse programming in content that is closer to young audiences and extends to other parts of Extremadura. The cycle will visit the town of Jerez de los Caballeros for the first time, where the group Tulare Duo will offer a concert on 24 November at the Balboa Theater Cinema, and the ‘Hermanos Berzosa’ Professional Conservatory of Music in Cáceres, which will host one of the pedagogical activities of the cycle. In his interest to get closer to the youngest, the cycle has increased the pedagogical program compared to the previous edition, going from five to eight activities that will take place in conservatories and music schools in different municipalities of Extremadura and Portugal. further, for the first time, the Symphony Orchestra of the Superior Conservatory of Badajoz, made up of students from this center, will participate in the programming and a concert will be held at the Skate Park of the Youth Center of the Badajoz capital, youth hub of the city, by the Ensemble Container. These new spaces are added to the already usual stages of the cycle such as the Extremadura and Ibero-American Museum of Contemporary Art (MEIAC), the Congress Palace, the López de Ayala Theater, the Library of Extremadura, the Noble Hall of the Badajoz Provincial Council or the University Residence of the CB Foundation.

The X Current Music Cycle will open on Tuesday 23 October at the Extremadura and Ibero-American Museum of Contemporary Art (MEIAC) with a concert by Prague Quartet of Prague, in which they will focus on the so-called "degenerate music", works of composers assassinated and marginalized by Nazism.

He Glass Farm Ensemble of New York will arrive to present the 6 November ‘The piano made of memory and silence’ project featuring pieces by the founder of the group, pianist Yvonne Troxler, together with works by Balz Trümpy, Ian Wilson, Fabián Panisello, José Manuel López López and a commission from the CNDM to César Camarero, frequent composer in the programs of this New York ensemble. Glass Farm Ensemble develops imaginative projects in unconventional spatial arrangements that invite the audience to an intimate experience of music.

One of the formations that has accompanied the cycle since its inception is NeoArs Sonora, who will return from Granada to the capital of Badajoz on 2 December to offer the Extremaduran public works by Jesús Torres and George Crumb, in addition to two absolute premieres by the composer Francisco Novel Sámano, Professor of Composition at the Superior Conservatory of Music of Badajoz and Antonio Blanco, who likes to combine musical creation with theatrical direction. The first is commissioned by the Philharmonic Society of Badajoz and the second by the CNDM.

The saxophone quartet flies leaf will offer the 11 December an ambitious and eclectic program with works of great difficulty formed by the absolute premieres of Afro-Roman dance by Leandro Lorrio, Swirls by Gabriel Erkoreka (this one commissioned by the Philharmonic Society of Badajoz) and a new piece by José Luis Turina. One of the members of this quartet, David alonso, He is a professor at the Official Conservatory of Music ‘Hermanos Berzosa’ in Cáceres.

Another of this year's outstanding proposals will come on 15 January with the Gypsy romance from Lorca, recited by Granada-born pianist Juan Carlos Garvayo on music by Manuel Martínez Burgos, nationally and internationally award-winning composer. In this concert he will premiere Poet in New York Y Gypsy romance, two commissions from the CNDM.

Following in the wake of the piano, another outstanding soloist, the vizcaíno Miguel Ituarte, the 1 February to commemorate the centenary of Debussy's death together with the world premiere, commissioned by the CNDM, of the last two sonatas by Jesús Rueda, Resident Composer of the current season of the national center.

EXTREME'S CONTRIBUTION TO THE 10TH CYCLE OF CURRENT MUSIC
The Current Music Cycle has always given a special role to Extremadura groups. In this edition there will be four: the Extremadura Orchestra, by the Symphonic Orchestra of the Superior Conservatory of Music ‘Bonifacio Gil’ of Badajoz and the ensembles Container and Sonido Extremo.

The Extremadura Orchestra (OEX), directed by Alvaro Albiach, will be present on 29 November with Manuel Blanco, the main trumpeter of the National Orchestra of Spain, in a subscription program that includes the premiere in Spain of Entropía, of the young Spanish-Portuguese composer Inés Badalo.

The Symphony Orchestra of the Superior Conservatory of Badajoz directed by David Azagra will perform the 18 January the suite orchestral arrangements Iberia by Isaac Albéniz performed by the composer Jesús Rueda, in addition to two concerts by Edward Elgar and Robert Schumann.

He Container set (15 February) will bring the cycle, as in the two previous editions, an avant-garde proposal that gravitates between electronic and rock, with a program full of premieres in Spain by European composers such as Sánchez-Chiong or Michael Beil and questions that invite us to reflect on music and current society. The stage of his concert will be the Skate Park of the Youth Center of the Badajoz capital.

Meanwhile, Extreme sound will offer the 8 March, a program that reflects on sound and includes the premiere of a play based on the shadow theater of Extremadura composer Inés Badalo, in addition to the work Coming Together by the American composer Frederic Rzewski, loaded with social content and that will have as a guest the singer from Badajoz Gene García, who will be the reciter. The program will be completed by the recent composition of Joan Magrané for saxophone and ensemble with Antonio García Jorge as soloist.

THE SUPPORT OF THE CURRENT MUSIC CYCLE TO THE NEW CREATION
The Current Music Cycle has always stood out for the amount of newly created works it hosts. In this edition you will be able to listen 10 prèmieres, three of them by composers from Extremadura or settled in Extremadura (Leandro Lorrio, Inés Badalo and Francisco Novel Sámano) Y 9 premieres in Spain. New works by Peter Eötvös will be played, César Camarero, Yvonne Troxler, Antonio Blanco, Jose Luis Turina, Manuel Martinez Burgos, Leandro Lorrio, Jesús Rueda, Francisco Novel Sámano and Gabriel Erkoreka.

The pedagogical program has grown compared to the previous edition. To the activities programmed in the conservatories of Mérida, Almendralejo, Badajoz, Elvas (Portugal) and the Villafranca de los Barros School of Music joins this year a new activity at the Professional Conservatory ‘Hermanos Berzosa’ in Cáceres.

The objective of these activities is to bring young people closer to the language of contemporary music through the meeting in the classrooms with participating composers and interpreters and the analysis of the works they present in the cycle.

To the activity that the Ensemble Container held last 11 October with students from schools in Badajoz, many of them without musical training, in which the children participated in a successful concert-performance of the work Ricefall (2) by the American composer Michael Pisaro, another seven will be added in music teaching centers.

In the Official Conservatory of Music of Almendralejo the 30 November the activity ‘Feel the music of today’, related to the Ensemble NeoArs Sonora concert, addressed to students of Fundamentals of Composition and Analysis.

He 4 December is scheduled the activity ‘Dances Afromeñas: an integrative compositional approach ’by the Extremaduran composer Leandro Lorrio, at the ‘Hermanos Berzosa’ Professional Conservatory of Music in Cáceres. This activity is related to the Folium Fugit concert.

At the ‘Esteban Sánchez’ Professional Conservatory of Music in Mérida, students of Fundamentals of Composition, Analysis and History of Music, will be able to participate in the activity ‘Look at the current music’ on 8 February, related to the concert that the Quiroga Quartet and the world premiere of Peter Eötvös, to be held 10 February in Badajoz, organized by the Department of Musical Language and Composition of this conservatory.

He 10 February will take place the ‘Meeting with Peter Eötvös and Jörg Widmann’ in the auditorium of the Superior Conservatory of Music of Badajoz. An activity open to the public in which both musicians will talk about the work Joyce which will premiere that same day in the Noble Hall of the Badajoz Provincial Council.

At the ‘Juan Vázquez’ Professional Conservatory of Music in Badajoz the 6 March the activity ‘ACTUAlizing’, coordinated by the director Jordi Francés. In it, an approach will be made to the languages ​​and ideas that are developed in each of the works of the concert program that Sonido Extremo will offer. 8 of March.

Another didactic session on this Extreme Sound concert will also be given by Jordi Francés on 7 March to the students of the Municipal School of Music of Villafranca de los Barros.

The pedagogical program will close in Portugal, at the ‘Rodrigues Coelho’ Music Academy in Elvas, where the Extremaduran and Portuguese composer Inés Badalo will keep the 7 March, a meeting of the students of this school in which they will talk about their work that will premiere Extreme Sound.