The CNDM presents its Summer Cycle of concerts in streaming 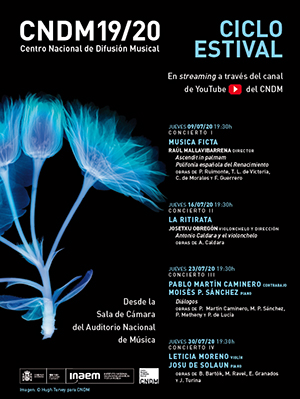 First-rate Spanish soloists and groups will offer from the Chamber Room of the National Music Auditorium four concerts of various musical genres throughout the month of July.

Thursday 9 of July, he National Dissemination Center Musical (CNDM), unit dependent on INAEM, begins its Summer Cycle, with the programming of four new concerts that will be broadcast through its YouTube channel (youtube.com/user/CanalCNDM). During four Thursdays in July you can enjoy a series of one-hour concerts from the Chamber Room of the National Music Auditorium “without public” and by leading Spanish groups and interpreters.

The group music, one of the most outstanding Spanish vocal ensembles in the interpretation of early music, will review under the direction of Raúl Mallavibarrena a selection of jewels of the Spanish polyphony, composed by some of our most recognized and international composers of all time, as Tomás Luis de Victoria, Cristóbal de Morales or Francisco Guerrero among others.

the Retreat, group created and directed by the cellist Josetxu Obregón and specialized in historicist interpretation, will present some of the pieces included in his recently released album Antonio Caldara and the cello, dedicated to the prolific cellist and venetian composer. The concert will include a preview of the historical recovery, Release in modern times, two-piece by the popular composer, of which this year the 350 years of his birth.

The duo formed by the double bass player Pablo Martín Caminero and the jazz pianist Moses P. Sánchez they will put the most current note with the genius and freshness of their own compositions and Leticia Moreno (fiddle) Y Josu de Solaun (piano) They will evoke the most exotic landscapes through the colorful music of Bartok and Ravel, in dialogue with the few bright Spanish pages for violin and piano; the Granados sonata and Turina's "Poem for a Sanluqueña".

The four concerts scheduled will be held on 9, 16, 23 Y 30 July at 19:30 hours and they can be accessed through the CNDM YouTube channel (youtube.com/user/CanalCNDM):

With this streaming cycle and other digital initiatives promoted in recent months, the CNDM is committed to maintaining its musical activity and fostering contact between the public and musicians as the new season approaches 20/21 and the desired reunion between artists and fans, both in the halls of the National Auditorium and in spaces throughout Spain and abroad where the institution holds its series and concerts.

Other innovative CNDM proposals that have kept the public “connected” with music have been the two series of Micro-concerts on Instagram, that gathered thousands of people through this social network. It should also be remembered the wide and diverse contribution of the institution to extraordinary streaming programming on the occasion of the European Music Day last Saturday 20 of June.