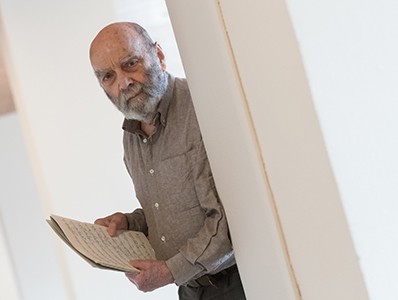 He Monday 26 October at 19.30 hours, he National Dissemination Center Musical (CNDM) celebrates the monographic concert Luis de Pablo x 90 dedicated to one of the most important composers, prolific and innovative Spanish music of the 20th and 21st centuries in its 90 anniversary. This tribute concert, to which his own will go Luis de Pablo, is part of the cycle dedicated to today's music Series 20/21 that he CNDM develops in the audience 400 of the Museo Nacional Centro de Arte Reina Sofía (Nnchhahris). The group Sound Workshop, created in the year 2000 and specialized in the interpretation of the most current music, will be in charge of giving life to a repertoire that includes 40 years of the long and intense career of the Basque composer: cloudy (2014), Drawings (1980), Just one day (1997), Second trio (2005) Y Twin of water (2016) are the works that can be heard, the two most recent being dedicated by the Basque author to Sound Workshop. Monday's concert, as well as the rest of the cycle Series 20/21 scheduled at the Reina Sofía, It is free access until full capacity of the room, reduced due to restrictions imposed by the current health situation.

The musicologist Antonio Gómez Schneekloth offers some biographical keys of Luis de Pablo: "Having enjoyed an early musical education, his professional career led him to law first. After having practiced a few years as a lawyer, returned to his musical roots, developed and founded them in 1958 the group Nueva Música, a year later the concert cycle Time and Music, Y, in 1965, the Alea group, together with the first electroacoustic music studio in Spain. He also translated important books, among them, a biography of Schoenberg and the writings of Anton Webern. With these and many other initiatives, decisively contributed to the country coming out of its isolation after Franco's confinement. Its catalog of works includes more than two hundred titles that show an unwavering desire for renewal that earned it international recognition in countries such as Japan., U.S, Canada, France, Italy or Germany. True to his artistic ideal, has always been a staunch defender of creative freedom and the most diverse artistic manifestations, reason that explains his forays into the fields of theater, cinema, electronic music, etc."