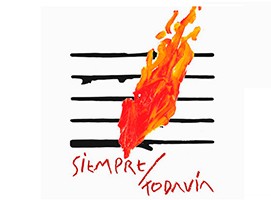 He CNDM has presented its current music program in Santiago de Compostela (within the fourth cycle "Contemporary conferences") and Badajoz (with the seventh edition of "Actual music"). Support for the music of our time is one of the pillars of the center and will, As it is usual, preferential attention to the organization of 44 concerts (a fifth of all programming), spread over 5 Spanish cities within the cycles "Series 20/21" and "Liceo de Cámara XXI" in Madrid (with 21 prèmieres), "Alicante Actual" (8 concerts and 8 premieres) the “Contemporary Conferences” of Santiago de Compostela (19 activities and 13 premieres), "Current Music" of Badajoz (9 activities and 11 premieres) and a world premiere opera without voices in Pamplona of the very recent National Music Award 2015 and "Resident Composer" of this season of the CNDM, Alfredo Aracil, and the iconic illustrator Alberto Heart (National Design Award 1989). Total, will be released 51 new scores, 21 of them commissioned by the CNDM, with a list of composers, mostly national, covering a wide generational range of different trends and styles, as Luis de Pablo, Anton Garcia April, Alfredo Aracil, Jesus Gonzalez, Manuel Rodeiro, Jose Rio-Couple, Juan Cruz-Guevara, Federico Mosquera Martinez, Jacobo Durán-Loriga, Laura Vega, Joan Arnau Pàmies, Ramon Paus, Irene Galindo, Carlos Cruz de Castro, Augustine Charles, Ramón Humet, Sebastian Mariné, Illuminated Pérez Frutos Y Joan Magrané, that we must unite the international teachers Lera Auerbach, Sarah Nemtsov Y Steffen Schleiermacher. These activities continue the commitment of the national institution to promote and disseminate contemporary musical creation throughout the country., through its program "Circuits" present in eighteen Spanish cities to which they join, for the first time, two foreigners: Bogotá (Colombia) and Elvas (Portugal).

The most cannibalistic Santiago
In the year 2012, and after 13 years without activity, The Contemporary Music Xornadas were reborn in Santiago de Compostela with the aim of promoting and disseminating the latest trends and innovation in contemporary music. Tomorrow begins the fourth edition that will run until 29 October in different areas of the city, in co-production with the Santiago City Council, CGAC, the University of Santiago and the collaboration of the Santiago Consortium and the Consortium for the Promotion of Music of A Coruña. As in previous editions, the city will be filled with contemporary music with a total of 19 concerts, of which 3 are framed within the pedagogical program and 3 in the "Off_Contemporánea!!”, part of the cycle that includes the most alternative proposals: other music, other visions, other spaces.

The Galician Chamber Orchestra will be in charge of inaugurating the cycle directed by Rogelio Groba with a monographic program to honor this Galician conductor and composer, what with 85 years has a catalog of more than 700 compositions. The Xornadas also want to celebrate the 50 anniversary of Manuel Rodeiro and Jesús González, two of the most representative composers of current Galician music, with a concert by the Instrumental Group Siglo XX directed by Florian Vlashi. Other Galician groups that are in the musical avant-garde will also have their space in the cycle: Vertigo Sonora Ensemble, pablo_seonae_trem (which will present the world premiere of ‘La Bestiaire’, composition inspired by the work of Apollinaire-Poulenc and Dufy), the wind quintet Zoar, the clarinetist Joaquín Meijide ("Shocks") and the Galician-Portuguese duo KONTAKTEduo. further, add the presence of the Municipal Music Band, the orchestra Real Filharmonía de Galicia (what, Directed by Diego García and with the participation of the former member of the band Siniestro Total, Julian Hernandez, will present Gruber's Frankenstein), the Galician Symphony Orchestra and the Camerata OSG. Foreign participation will materialize in concerts by the Extremadura group Sonido Extremo, the Gerhard Quartet and the pianist Francesco Tristano.

Special attention requires the second performance of the opera without voices ‘Always / Still’ that will take place on 23 October at the CGAC, by the pianist from Granada Juan Carlos Garvayo. The work is based on a script by the composer Alfredo Aracil based on the book Damasco Suite, we are memory (Now Bibliophilia Editions, 2004), published after a momentous stay by the Madrid designer ("The father of Spanish design") Alberto Corazón in the Syrian capital in 2002, on the occasion of a retrospective exhibition that the National Museum of Damascus dedicated to his painting and sculpture. Two days before, on Wednesday 21 there will be a meeting with the two artists at the CGAC as a preamble to the opera. This show is a co-production of the CNDM together with the University of Navarra and Metacción.

The conquest of the west
Co-produced by the CNDM with the Philharmonic Society of Badajoz, and with the support of the Ministry of Culture of the Government of Extremadura, City Hall, the Provincial Council of Badajoz and the Caja Badajoz Foundation, the seventh cycle "Current Music" will begin on 13 October and will run until 30 of January of 2016 with 7 concerts in various spaces in the capital of Badajoz and two pedagogical activities, one of them, in Elvas (Portugal). For second consecutive Year, the city of Badajoz participates in the CNDM music “Circuits”, through this cycle of music that the Philharmonic Society of Badajoz created seven years ago as a space for the dissemination of current music, becoming in a short time a benchmark inside and outside Extremadura. This collaboration has allowed to increase the concerts of the cycle and the absolute premieres, that this year will be 11. Some of the composers who will premiere their works are Extremadura or are based in Extremadura, like María José Fontán or Domenéch González de la Rubia. Three of the eleven works that are premiered are commissioned by the CNDM and two by the Philharmonic Society. Throughout these four months, a wide and varied perspective of contemporary musical creation will be presented through seven formations, two Extremadura (Extreme Sound and the Extremadura Orchestra) and five foreigners (Sonor Ensemble, Ensemble 20/21 of the Young Orchestra and Choir of the Community of Madrid -JORCAM-, NeoArs Sonora Ensemble, Duo Cassadó and the Quiroga Quartet) that will be presented in different spaces of the Badajoz capital such as the López de Ayala theater, the Congress Palace, the Extremadura and Ibero-American Museum of Contemporary Art (Meiac) or the Noble Hall of the Badajoz Provincial Council.

The educational bet
The didactic section of the Xornadas takes special care of the fundamental approach to the youngest of contemporary music and current creation, through proposals in the form of concerts for children, youth and family. In this edition, under the name "AdesTempo", will present three varied shows in the form of concerts for children and families: on Sunday 18 the Orquestra do Espazo de Cámara of the University of Santiago directed by Mario Diz will present the program ‘Tales of always told like never before. Concert for music box and orchestra 'at the CGAC. Saturday 24 The Real Filharmonía de Galicia will offer a second concert of Gruber's Frankenstein at the Auditorio de Galicia accompanied again by Julián Hernández and directed by Diego García. And Sunday 25, the Theater Hall will receive the Contemporary Dance Group of the Lugo Conservatory with "resonances in motion: a didactic dance and percussion show ".

Meanwhile, Música Actual includes this year as a novelty a pedagogical activity in which a group of students from the "Juan Vázquez" Professional Conservatory and the Rodrigues Coelho de Elvas Music Academy will participate. (Portugal) and which will consist of facilitating the approach of the youngest to current music. For that, The teachers will provide these students in the classrooms with the keys to contextualize and become familiar with the music that they will later be able to listen to in the concerts of the cycle. Elvas students are expected to attend the Ensemble concert 20/21 of the JORCAM on 23 November and those from the Badajoz Conservatory to the concert of 30 January of the Quiroga Quartet.

All concerts, both from Santiago and Badajoz, They are with free admission until full capacity is reached, except those of the Extremadura orchestras, Real Filharmonía de Galicia y Sinfónica de Galicia.