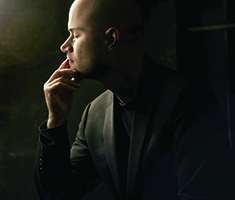 Hailed by critics for its current beautiful voice, surround velvety, and the dramatic force of their performances (He was nominated for the Laurence Olivier Award 2007), Bejun Mehta (nephew of the conductor Zubin Mehta) come back to Teatro Real at a particularly sweet career, preceded by great successes in major theaters and festivals in Europe and US. Recently, in a critique of the New York Times, It was described as "one of the most impressive and inspiring countertenor of our era".

After a childhood as "wunderkind", in which Mehta noted for his musical talent and ductility and breadth of his voice -alabados both by Leonard Bernstein—, the singer began a career as a baritone before finally devote himself to the repertoire for countertenor.

Owner of a wide-that culture degree in German literature from the University of Yale, Mehta stands out not only for his performances of baroque and classical works, but also for its increasingly frequent incursions in contemporary music: their participation in the world premieres of Written on Skin and Dream of the Song, from George Benjamin -the first of which will be heard at the Royal in March- scored a huge success, and in January in Hamburg awaits the premiere of Stilles Meer (silent sea), from Toshio Hosokawa. Also the simultaneous countertenor her singing career with his sporadic performances as a conductor.

Bejun Mehta made his debut at the Royal in September 2005, Farnace playing the role of the opera Mitridate, Re di Ponto, from Mozart, with Les Musiciens du Louvre under the direction of Marc Minkowski.

This time he again accompanied by another prestigious chamber orchestra, la berlinesa Academy of Ancient Music (Akamus), which it has an extensive track record of success and accolades since its founding in 1982. Together they will perform an attractive program that runs through the musical classism over four generations of composers: Johann Adolph Hasse (1699-1783), Christoph Willibald Gluck (1714-1787), Johann Christian Bach (1735-1782) Y Wolfgang Amadeus Mozart (1756-1791). All encouraged by the aura of the Enlightenment, his lyrical creations are part of the opinions of the opera called serious, with its ubiquitous da capo arias, whose ornamentation and beautiful melodies delighted the fans divas then, including highlighting, their halo, prodigy and delivery, the famous castrati.

Nowadays, the evocation of these supernatural and unique voices through no less singular of countertenor, Get us back to the busy days when music sounded within the palaces and theaters of enlightened Europe, fragmented and changing the time, when power and art still walking hand in hand.