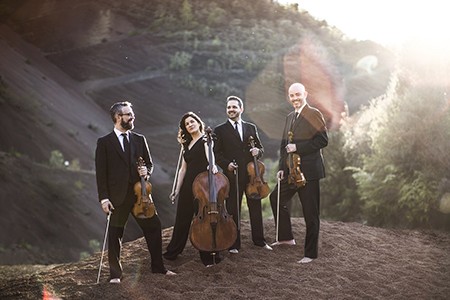 He Saturday 9 February to 19.30 hours, National Dissemination Center Musical (CNDM) It presented in Chamber Hall of the Auditorio Nacional laureateCuarteto Quiroga, Recent National Music Prize 2018, together with the prestigious clarinetist and composer Jörg Widmann. The reason for this exceptional crossroads is the absolute premiere of Joyce, commission that the CNDM has carried out together with the Philharmonic Society of Badajoz to the Hungarian composer Peter Eötvös. This is the second work that our institution requests this international master, after the quartet for string and soprano sirens cycle co-commissioned in 2015 in co-production with London's Wigmore Hall, la TonhalleGesellschaft de Zúrich, Alte Oper Frankfurt, IRCAM – Paris Pompidou Center, ProQuartet – Center Européen de Musique de Chambre in Paris and the Südwestrundfunk premiered by the Calder Quartet and the soprano Audrey Luna. In fact, this new piece comes from one of the movements that cycle, but this time, for string quartet and clarinet. The program will be completed on Quartet No. 2 de Béla Bartók (work included in Terra, Cuarteto Quiroga latest album) and the And Clarinet Quintet in B flat major cuerdadde Carl Maria Von Weber. The last tickets for these two concerts, with a general price 10 a 20 euros, They are on sale at the box office of the National Auditorium, INAEM theaters, www.entradasinaem.es Y 902 22 49 49. The next day, the concert will be repeated in Badajoz in the X Cycle Current Music &, in addition to these two concerts, Monday 11 February, Cuarteto Quiroga will participate in a meeting at the San Pablo CEU University.

Peter Eötvös, composer, Hungarian conductor and teacher, is, undoubtedly, one of the most important 20th century music performers in the world. Born in Transylvania in 1944, It is considered long one of the most significant and influential figures from the international music scene and one of the most important conductors and composers, thanks to his operas, orchestral works and concerts written for the most outstanding artists. For Eötvös it is vital to pass on his extensive knowledge to others, target getting through his work as a teacher of the Conservatories of Cologne and Karlsruhe and master classes and seminars throughout Europe, in addition to the support offered to young composers and directors by two institutions located in Budapest: on "International Eötvös Institute" (created in 1991) y la “Eötvös Contemporary Music Foundation” (founded in 2004).

The idea of Joyce comes from The Sirens Cycle (2015-2016) for string quartet and soprano, piece divided into ten movements that "translated" Homer's texts into musical language, Joyce and Kafka. The starting point of that composition was the strange tale of Kafka The silence of the sirens. The theme captivated Eötvös to the point of creating links between the Kafkaesque mermaid motif and two others attributed to Joyce and Homer.. In this way a cycle arose in three very different parts that, However, in their diversity embody singing or, in Kafka's words, to the silence of the sirens. To this must be added another Joyce for solo clarinet —written by Eötvös thinking of the great Jörg Widmann— which is the germ of this new perspective that he now offers us on the language of James Joyce, expanding it this time with a string quartet. According to Francisco García Tortosa, your editor and translator, at Ulises by Joyce "style is at the mercy of the language". And that language, that voice, that confrontation, but also complementarity of styles, is what comes to us here in the form of sound.

Según Eötvös: "My compositions always have a narrative character. They usually start from spoken language. This is evident through the theme of my pieces and the propensity for a very meticulous musical articulation.. Composing for string instruments gives me a special pleasure, since they are the closest to speech, thanks to its rich color palette and huge scope, ranging from the lowest sounds to the highest and loudest ".

Deeply involved with the teaching of chamber music, are professors at the Llanes International Course, responsible for the Chair of Quartet and Chamber Music of the Superior Conservatory of Music of Aragon and regularly invited to give classes at JONDE and in Superior Conservatories and Universities throughout Europe, United States and Latin America. His first record, Statements, garnered unanimous applause from specialized critics and was awarded the "Best Album 2012" Award by the Independent Phonographic Union. His second job, (R)evolutions, dedicated to the early music of the Second Vienna School, It has been received with the best critics and the highest distinctions by the European and North American specialized press. In Spain it has been distinguished with the ‘Exceptional’ seal by Scherzo magazine and as a “record for history” by Ritmo magazine.. His next record works, Free but lonely (Cobra), dedicated to the Opus Quartets 51 by Johannes Brahms and his recording collaboration with Javier Perianes for Harmonia Mundi, dedicated to the Quintets for piano and strings of Granados and Turina, have garnered awards and accolades in magazines such as Scherzo, Rhythm, Music lover (Spain), The Strad, Gramophone, BBC Music Magazine (UK), Pizzicato (Luxembourg), Listen (Holland) and in media like Radio France ("Recommended disk"), NDR Germany ("Record of the Year"), Klara Belgium ("Disc of the Month"), ICMA (finalist 2017) etc. Last season his fifth CD came out, Terra, with works by Bartók, Ginastera and Halffter, also recorded for Cobra Records. The Quiroga Quartet has its official residence at the Fundación Museo Cerralbo in Madrid. Cibrán Sierra and the other members of the quartet wish to express their gratitude to the heirs of Paola Modiano for their generous loan of the violin Nicola Amati “Arnold Rosé” from 1682.

The group made up of Aitor Hevia (fiddle), Cibrán Sierra (fiddle), Josep Puchades (viola) y Helena Poggio (cello) has just started a tour with Argentine artist Martha Argerich, that will continue in April through various cities in Italy. In these first months of the year, its agenda includes performances in numerous Spanish and European cities, a tour of the United States and the publication of his sixth album, an anthology of music of its kind created in the surroundings of Goya's Madrid. The disc, which includes first recordings of unpublished works by artists such as Boccherini or Brunetti, It was recorded in mid-December in Flanders and will be released on the Cobra Records label..