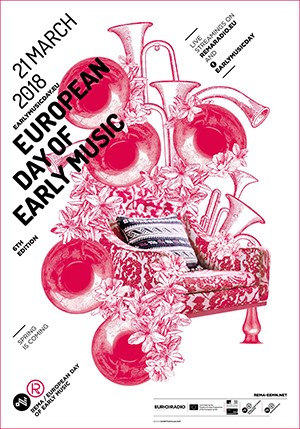 During the day, concerts will be held, conferences and workshops simultaneously across Europe in order to value an artistic heritage, historical and musical representing more than a thousand years of history. Many of these activities can be followed live streaming on Facebook pages Total earlymusicday and Baroque, and the web remaradio.eu, as well as several national broadcasters through collaboration with the European Union Radio-Television.

Skip Sempé, clavecinista, director and founder of Capriccio Stravagante, will be the Ambassador of the sixth edition of the European Day of Early Music (EDEMA), which will feature the participation of artists and institutions of international prestige in the field of early music as Wunderkammer of Trieste, Pavia Barocca - Collegio Ghislieri, International Handel Festival Göttingen, el Ambronay Cultural Encounter Center, The Spiritual Concert &amp; Hervé Niquet o el Concertgebouw Brugge, among others. Spain will be represented with a total of ten events, organized by the Conservatory of Music in Menorca, The Archduke’s Consort (Mallorca), CdM Cultural Foundation (Valencia), A5 Vocal Ensemble (Sevilla), Romandela and Carlos Antwerp Foundation (Madrid), the Teatro de la Comedia de Madrid, Spain (Majadahonda), y el Early Music Project (Murcia).

the EDEM, that emerged in 2013 with the support of which was European Commissioner for Culture, Androulla Vassiliou Cypriot and renowned musician Jordi Savall, It has established itself as an important international meeting, in which many performers and organizations join forces to give greater visibility to early music. Prominent figures historicista movement Jacobs René, William Christie, Hervé Niquet Enrico Onofri or have supported this initiative, which last year reached a high level of participation, with 130 events 24 countries, a total of 91.466 visualizations on Facebook.