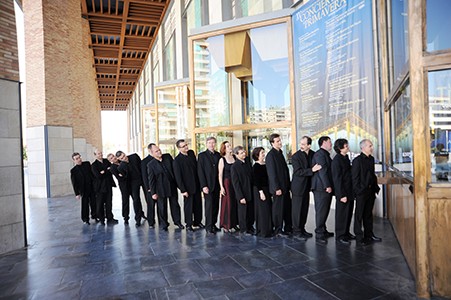 Next Monday 18 February, the National Broadcasting Music Center (CNDM) It presented in the Auditorium 400 the Museo Nacional Centro de Arte Reina Sofía in its cycle Series 20/21, the premiere of Rise of the echoes, double string quintet commissioned by the center Cristobal Halffter teacher. The premiere will be performed by the iconic Enigma Group, Chamber Orchestra Auditorio de Zaragoza, directed by Nacho de Paz, replacing Juan José Olives, died last December and to whom the concert is dedicated in memoriam. This work is the second commission that the CNDM makes to the Madrid composer, behind the Quartet No. 8 “Absences”, premiered by the Leipzig Quartet in 2013. Along with this score there will be works by Jesús Rueda (Quartet No. 3 ‘Islands‘) y Dimitri Shostakóvich (Chamber Symphony in C minor ‘In memory of the victims of the fascism and war ’). Complementing, the same Monday 18, to 18 hours, Halffter will participate in a talk about his work at the Real Conservatorio Superior de Música de Madrid, activity included in the Seminar "The creation and interpretation of current music". Both the previous talk and the concert will be free admission until the capacity of the rooms is complete.

According to Antonio Gómez Sneekloth: “In Rise of the echoes, Cristóbal Halffter implicitly approaches programmatic music. But beware! His literary idea is not the object of a direct translation to the sound universe, rather, it manifests itself through echoes that are established between the two quintets located on either side of the director. The symmetry thus obtained between the two sets, which may well be increased to obtain orchestral dimensions, it is the base on which echoes are built that are not mere imitative calls, but they structurally unite the part. Halffter's idea of ​​operating below the grades is that of a society in which certain individuals aspire to be independent, needy, but nevertheless, of preparation and the guts to create something that leaves an echo behind. Original-eco / eco-original: the dialogue established between the two quintets is made of interwoven scraps, captured on the fly both to the left and right of the director”.

Cristobal Halffter (Madrid, 1930) is one of the most outstanding composers of the known as “Generation of '51”, of which Luis de Pablo is also part, Carmelo Bernaola, Joan Guinjoan or Ramón Barce. Indispensable name of the national music scene of the last half century, He was a student of Conrado del Campo and Alexander Tansman, and obtained the Chair in Composition at the Superior Conservatory of his hometown, body of which he would be director of 1964 a 1966. Later, he expanded his musical studies with scholarships in Paris, Rome and Milan, relating to Albert Blancafort, Luigi Dallapiccola, Luciano Berio and Bruno Maderna. His successful career as a composer has been joined by his extensive career as a conductor., work that has led him to work with the main international groups in the most important spaces in Europe and America. Among his many recognitions is his membership as a member of the European Academy of Sciences, of the Arts and Letters of Paris, Berlin Arts, of the Royal Academy of Fine Arts of San Femando, Doctor Honoris Causa from the University of León, the Goethe Medal, the Montaigne Prize from the Friedrich von Schiller Foundation in Hamburg, the Gold Medal for Merit in Fine Arts and the National Music Award received in 1989.