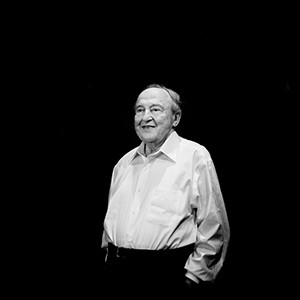 They are two of the rare occasions in which you can enjoy the virtuoso live nonagenarian.

Next Thursday 17 May the National Dissemination Center Musical (CNDM) enters the final stage of its cycle “Liceo de Cámara XXI” in the Chamber Hall of the National Music Auditorium with the legendary pianist Menahem Pressler, will offer two concerts: in the first, We will present solo works Wolfgang Amadeus Mozart, Robert Schumann, Claude Debussy Frédéric Chopin, program that a priori seems heterogeneous but whose protagonists have in common talent as composers for piano pieces. The second date, and closing this season, will be on Tuesday 22 It may and will be accompanied on stage by the prodigious Pacifica Quartet to perform works by Mieczysław Weinberg y Alfred Schnittke next to the monumental Piano Quintet in F minor Cesar Franck. The latest posts, with a general price 10 a 20 euros, and are on sale at the box office of the National Auditorium, INAEM theaters, www.entradasinaem.es Y 902 22 49 49. Complementing, on Wednesday 2 and Thursday 24 of May, Pressler taught master classes for students of the School of Music Reina Sofia in Madrid.

Menahem Pressler, pianist founder of the Beaux Arts Trio, It has established itself among the most distinguished musicians on the international scene, with a career spanning almost six decades. Now, to the 94 year old, continues to captivate audiences around the world as a performer and pedagogue, performing solo recitals and chamber musician.

Born in Germany in 1923, Pressler fled Nazi Germany in 1939 and he emigrated to Israel. His distinguished career globally after winning the first prize in the "Debussy Piano Competition" in San Francisco began in 1946. Then he made his successful American debut with the Philadelphia Orchestra under the baton of Eugene Ormandy. Since then he has toured extensively in North America, Europe and the Far East. In addition to nearly a decade of remarkable solo career, Pressler debuted as a chamber musician in 1955 Berkshire Festival, where he appeared as pianist of the Beaux Arts Trio, formation who led for almost 55 years, until the season 2007-2008 violinist Daniel Hope, cellist Antonio Meneses and the pianist decided to dissolve the successful formation. Despite the end of the artistic legacy of the trio, Pressler has continued to dazzle audiences around the world, as soloist chamber musician, acting as Juilliard quartets, Emerson, Pacifica and Ebène. After his collaborations with orchestras such as the Berlin Philharmonic, Orchester de Paris, Staatskapelle Dresden with Christian Thielemann or Concertgebouw Orchestra, season 2016 Menahem Pressler toured Europe, US and Israel, giving recitals, concerts as a chamber musician and orchestral concerts, In addition to acting at the Ravinia Festival and the Tanglewood Festival, where she performed with the Boston Symphony, the orchestra also gave lectures in this city during the concert season.

For almost 60 years, Menahem Pressler has taught piano at the faculty of Indiana University, where he is Distinguished Professor of Music. In addition to his illustrious career as a pianist, Professor Pressler has been named as “Master of Education”. Among his many distinctions, He has received honorary doctorates from the Manhattan School of Music, 6 Grammy nominations and the award for "Lifetime Achievement Award" from Gramophone. It has been awarded the "Certificate of Honor" German Critics of Music and has been elected to the American Academy of Arts and Sciences. In 2007 He was named honorary member of the Jerusalem Academy of Music and Dance for his career. In 2005 He received the Order of Merit of the Federal Republic of Germany and the Ordre des Arts et des Lettres in France. Among his most recent awards include the prestigious medal awarded in Wigmore 2011, the "Menuhin Prize" awarded by Her Majesty the Queen of England 2012 and the "ECHO Klassik 2015" award for his career in Germany.

After recording virtually all the chamber repertoire with the Beaux Arts Trio, in 2015 Decca released a self assembly 60 CD's of the complete recordings of the Trio of Philips Recordings, Pressler has compiled over thirty solo recordings with works ranging from Bach to Ben Haim, and he has begun recording the complete sonatas of Mozart with La Dolce Volta. Among its DVD concerts with Paavo Järvi and the Orchester de Paris included, Sir Simon Rattle and the Berlin Philharmonic and their live concert 90 Birthday at the Salle Pleyel in Paris with the Ebène Quartet. further, They have written several books on his honorific legacy, incluyendo “Menahem Pressler: The Artistry of Teaching” y “Always Something New to Discover: Menahem Pressler and the Beaux Arts Trio.”