The Liceu accessible to deaf people 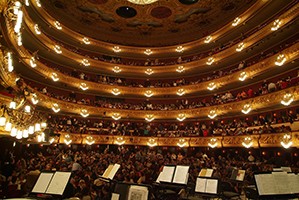 He Gran Teatre del Liceu He has presented the launch of a magnetic loop, with the aim of favoring that deaf people can fully enjoy the shows.
The event had the participation of Roger Guasch, Director General of the Lyceum, José Luis Aedo, President FIAPAS, Xavier Grau, Eleven delegate Foundation, Santiago Moreno, General Director of the Vodafone Foundation, Josep Ollé, representative of the La Caixa Foundation and Director of Palau Macaya, Y Raimon Jané, President ACAPPS.

The installation of the magnetic loop, that has coverage in all room, Foyer, Box Office and guardarropía, assumes that people wearing hearing aids (hearing aids or implants) you can listen to music with higher quality and, in general, improve sound reception.

Thus the Liceu is at the forefront of the opera houses of the world that are provided with this technology, which complies with the rules of perceptual quality in this area and has been validated by different groups of users of hearing aids.

The first show in which this technology is fully will use will be the premiere, the next Friday, de la ópera Porgy and Bess, once performed various tests during rehearsals this week.

This initiative joins others undertaken at the Liceu with other groups of disabled, such as audio-description service for blind people during operas. Both projects are part of the project "The Liceu accessible".

The Director General of the Liceu, Roger Guasch, He explained that the initiative of the magnetic loop is part of Social Theatre Project: "It is one of the three vectors of the Strategic Plan 2014-2017, which seeks to return to society what society gives the Theatre ".
He said you have to make the theater accessible space and this means "giving access to culture to the groups that are now facing difficulties to fully enjoy the musical offerings".

In this sense, It has announced that it will launch a "Accessibility Audit", to determine the Liceu access difficulties with certain groups. "It is about knowing what the barriers are and take necessary measures with the participation of various associations of groups with disabilities, we help overcome the shortcomings of the theater in this area ", adding that it is "not only comply with the law but to go further and make the Liceu a meeting of the society, one Liceu for everyone ".