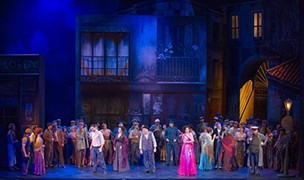 He Teatro de la Zarzuela has chosen for the beginning of his lyrical season "The loves of Ines", a work of youth Manuel de Falla, and the popular "The Festival of the Dove", from Tomas Breton. scenography, by decision of the stage director José Carlos Plaza, be inspired by the painting of Amalia Avia. The urban themes of this realist painter, its facades deteriorated by the passage of time, its shops and taverns, they will dress the Madrid of the end of the 19th century in which the zarzuelas are set. Faced with the burlesque and jovial air of both plays, Amalia Avia's themes introduce a very suggestive counterpoint, maybe serious and dramatic, a bath of reality. Coinciding with the representations, he Museum of the Royal Academy of Fine Arts of San Fernando presents a selection of seven works by the painter, typically Madrid songs chosen among the best of his production, as well as some images of the scenery created by José Carlos Plaza.Amalia Avia (1930, Holy Cross of the Zarza, Toledo – 2011, Madrid) She was one of the great Madrid chroniclers of the years 70, 80 Y 90. He belonged to the prolific group of "Madrid realism", in which referential artists such as Antonio López are included, Julio Lopez Hernandez, Maria Moreno, Isabel Quintanilla or Francisco Lopez Hernandez, all of whom he met precisely in the surroundings of the Academy of Fine Arts, place where, but nevertheless, she did not study.

Exposition: Museum of the Royal Academy of Fine Arts of San Fernando, until the 10 November 2013 in the living room 30 from the museum, 2nd floor.