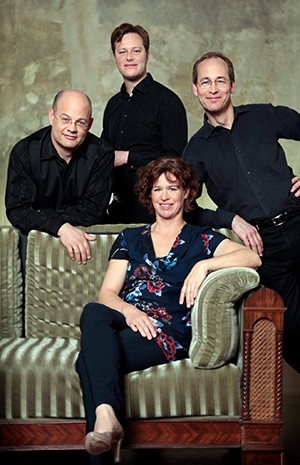 El Mandelring, one of the top six string quartets around the world according to music magazine Fono Forum, again in Spain. The next 13 April at the Theater Philharmonic Society of Bilbao and the day 15 of April, at Auditorio Nacional de Madrid (Liceo de Cámara XXI - CNDM), we shall hear the famous German set, whose complete recording of the fifteen string quartets of Shostakovich has been acclaimed among the most important recordings of recent times. In the agenda of its Spanish tour, works of Kurtág, Mendelssohn y Brahms.

El Mandelring, which usually invites outstanding soloists to play with them in collaborative programs, It will this time with the presence of Murcia violist Joaquín Riquelme, violist of the Berlin Philharmonic, for Mendelssohn and Brahms quintets.

Founded in years 80 by brothers Sebastian (fiddle), Nanette (fiddle), Bernhard Schmidt (cello), and his friend Roland Glassl (viola), That after 16 years left the quartet to pursue other projects, and whom, From season 2015-2016, replaces Andreas Willwohl, expert interpreter camera, who was principal violist of the Symphony Orchestra of Radio Berlin. Expressiveness and superb homogeneous and transparent sound are hallmark of this set of rope in which each musician shines as virtuous. Investigate and discover new meanings that reveal the essence of the music they perform, It is the desire of the four musicians who make up Mandelring Quartett.

His numerous recordings awarded the most prestigious awards, They are a sample of the wide repertoire of the famous German team and its outstanding quality, which it has been praised by international critics.

In addition to having its own concert series at the Philharmonie in Berlin, Mandelring quartet is the founder and artistic director of Hambacher Musikfest, a meeting place for chamber musicians around the world.