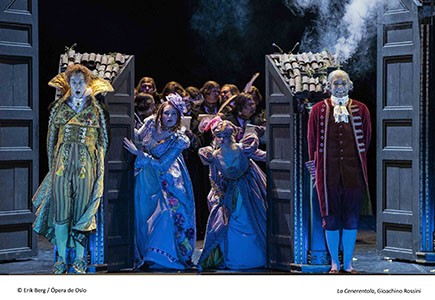 He Teatro Real inaugurate the next 23 September Season 2021-2022 ─the twenty-fifth since the reopening and one hundredth since its inauguration─, with Cinderella, from Gioachino Rossini.

They offer 15 functions of the opera, between 20 September Youth Preview of the Season and 9 October, in a co-production of the Den Norske Opera in Oslo and the Opéra National de Lyon presented in both theaters in 2017, precisely two centuries after its premiere at the Valle Theater in Rome, in 1817.

In fact, Cinderella, that is, goodness in triumph (Cinderella, I mean, The triumph of goodness) it was composed against the clock, in record time of 24 days, with astonishing speed and synchronous coordination between librettist Jacopo Ferretti and Gioachino Rossini, that their 25 years he was already a consecrated composer, with 19 operas in your catalog, including such popular titles as Tancredi, The Italian Girl in Algiers, The turkish in Italy, Otello O The Barber of Seville…

Before the rush of time, Rossini worked piecemeal, reusing fragments from previous operas, how i used to do, in addition to having the collaboration of Luca Agolini for the writing of the recitatives.

Due to the limited technical possibilities of the Roman theater stage and the pressure of the premiere, Rossini and Ferretti decided to use a version of the story by Cinderella stripped of its fantastic elements: the wicked stepmother was replaced by the mean stepfather Don Magnifico; the fairy godmother disappears, leaving Alidoro as ‘godfather’ of the unfortunate maid, and the iconic shoe is replaced by a simple bracelet.

Both the profile of the characters and the score reveal a perfect osmosis between the tradition of the dramma giocoso and from the opera jokes with Don Magnifico and Dandini, heirs of the art commedyand elements of an already romantic ‘realism’ represented by the philosopher Alidoro or the leading couple.

With its astonishing melodic richness and brilliantly effective orchestral palette, Rossini delights in the humor of the characters and the great situations the set numbers, but also with bel canto arias of great sentimental ardor and vocal virtuosity.

The staging of Stefan Herheim returns to the tale of Cinderella its thaumaturgical elements, giving Rossini himself a ‘magic baton’ with which to bring his irreverent characters to life, in a permanent illusionist game closer to the universe of Lewis Carroll than to Charles Perrault.

Herheim recreates himself with the opera dress-up game, dressing up Rossini as Don Magnifico, in a clear nod to the famous production of Cinderella conceived by Jean Pierre Ponnelle, in which Rossini was hiding behind Alidoro, and that Teresa Berganza brilliantly starred.

The musical direction will be borne by Riccardo Frizza, who already directed the two versions of Tancredi, Rossini also, in 2007. It will have the Headlines Choir and Orchestra of the Teatro Real, that they will interpret again Cinderella 20 years after the last production of this title presented at the Real, with musical direction Carlo Rizzi and stage director Jerome Savary, in 2007.