The body of Hans Fagius in the Cathedral of Leon 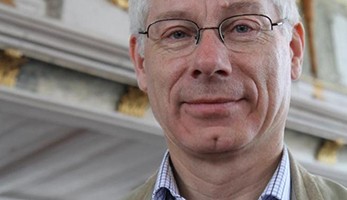 He 21 March 1685 the History of Music stops to celebrate with emotion the birth of the great master, of the great teacher of all musicians, Johann Sebastian Bach. We recall here his work for organ, in a project that is always a milestone in the world of music and, definitely, a unique opportunity to discover and fully enjoy an incomparable artistic corpus: Bach's organ integral. During the next two seasons of the CNDM we will have the opportunity to attend 40 concerts distributed between the Symphony Hall of the National Music Auditorium and León Cathedral, by the most outstanding organists in the world.

Hans Fagius (1951, Norrköping, Sweden), has been for many years one of the most active organists in Sweden. He received his basic education with Bengt Berg, and at the Stockholm Higher School of Music with Professor Alf Linder. In 1974/75, continued his studies in Paris with the famous organist and composer Maurice Duruflé. His concert career began after winning prizes at the international competitions in Leipzig. (1972) and Stockholm (1973).
In addition to the numerous recitals that he regularly offers in Europe, has toured North America, Australia, South Korea and Japan. Although he basically performs early music and music from the romantic period, his repertoire encompasses music from all eras. He has presented in concert cycles with the complete work of several composers, among them the integral of J.S. Bach (three times, the last one took place in 2007), Buxtehude, Franck, Alain, Mendelssohn, Brahms, Duruflé, etc. Hans Fagius is well known for his many recordings with the Swedish label BIS.
It has recorded the complete work for organ by J.S.. Bach, as well as a wide spectrum of music from the romantic era, como Liszt, Widor, Saint-°©‐Saëns, Karg- ° © ‐Elert o Duruflé. He has also recorded with the Danish record labels DaCapo (Hartmann and Gade), CD Classic, DK (german romantic music), and also with Rediviva music (Bach and Leufsta Bruk) y Daphne (Mendelssohn). His latest project is a CD with the organ symphonies of Widor and Vierne.
He has also written a manual on the organ works of Johann Sebastian Bach which was published in 2010. He was appointed professor of organ at the Royal Danish Academy of Music in 1989, after several years as organ teacher at the Stockholm and Gothenburg Colleges of Music. He frequently gives master classes and is frequently a member of the jury in international organ competitions around the world..
He was elected a member of the Royal Swedish Academy of Music in 1998.