Mozart's Requiem at the Cathedral of Toledo 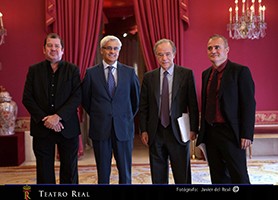 Saturday 20 September will take place in the Cathedral of Toledo one of the most anticipated concerts that, on the occasion of the celebration of the IV centenary Greco 2014, are developing in the capital of La Mancha.

This time it is Mozart's Requiem, collaboration with the Royal Theater. Its headline director, Ivor Bolton, at the head of the Orchestra and Choir of the Theater, will also conduct the Swedish soprano Camilla Tilling, mezzo-soprano Ann Hallenberg, the young Spanish tenor David Alegret and the British bass Alastair Miles.

For the first time in the city of Toledo, A large screen will be installed in the Plaza de la Catedral for the broadcast of the live concert and that it can reach, for free, to all the public who want to approach the vicinity of the Cathedral of Toledo.