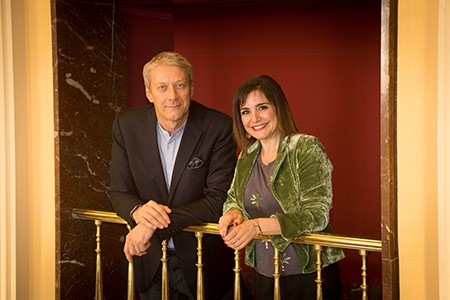 The director of the Teatro de la Zarzuela, Daniel Bianco, and the Councilor for Culture of the City of Aviles, Yolanda Alonso, They have reached a According to the titles of Zarza Project, one of the proposals of the Madrid coliseum star, presented during the next two seasons at the Teatro Palacio Valdés in that city just after terminating the functions in Madrid. The colaboration will start in March next year 'Water, sugars and brandy ' from Federico Chueca. The aim of this new partnership is collaborate and join forces in educating children and young people through our own musical heritage, artistic and cultural.

Zarza Project, included in educational projects Teatro de la Zarzuela, turn on new productions of operetta whose hallmark is that they are made by and for young people from 12 years. The artists, from among 18 Y 30 years, They are elected by auditions which hundreds of applicants from all over Spain have, and even beyond our borders. The functions are directed and adapted by leading figures in the scene.

To date there have been three titles Zarza that have been presented on the stage of the Plazuela de Jovellanos of Madrid: 'The Revoltosa ', from Ruperto Chapí, adapted by playwright Gillem Clua and taken to the scene José Luis Arellano, of which five school functions offered –to which attended 3.828 young people from fifty-seven Secondary Education centers, high school, Vocational training, Performing Arts and University degree–, and three other functions for the general public, to which attended 2.845 more spectators. Total, 6.673 viewers.

The second title, released in February 2018, It was 'The African duo’, from Manuel Fernández Caballero, adapted and directed by Susana Gómez. the number of school features five rose to nine, to which attended 6.139 youth eighty-three centers. The three functions open to the public saw them 2.177 people. Total, 8.316 viewers. For 'La verbena de la Paloma'This season, adapted and directed by none other than Pablo Messiez, and musically directed by the musical director of the theater itself, Asturian Oliver Diaz, They are scheduled seven school functions, to which attended 5.730 youth 67 schools, and many other functions open. Total, 11.480 viewers. So far a total of 26.469 viewers He has already enjoyed Zarza Project in Madrid.