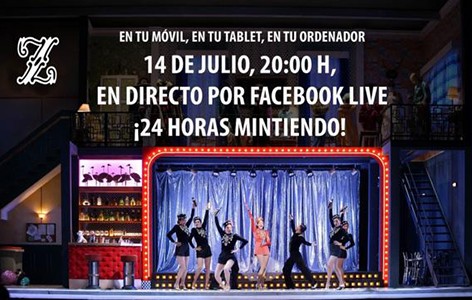 The Teatro de la Zarzuela will take advantage of the last performance of the season to launch to the rooftops its purposes of strengthening its basic condition that makes it a unique theater in the world and for everyone, and incidentally to reinforce the international projection of the Spanish musical heritage. This will be possible on Saturday 14 July thanks to the live broadcast through Facebook Live, and for free, from "24 Hours lying!’. This will be the finishing touch to a particularly intense season.

"24 Hours lying!’, a madcap musical comedy Francisco Alonso in which nothing is what it seems and will serve as grand finale of the season 2017/2018, is on the bill since 29 June to 14 of July.

This time, the script to write Francisco Ramos de Castro and Joaquín Gasa for the premiere of the work in 1947 It has been updated by the last National Prize Dramatic Literature, Alfredo Sanzol. This free version of Sanzol and dramaturgy Jesus Castejon weave a sparkling show in which are reflected some of the ills of society then and now, centered cynicism in the world of gastronomy, politics and show business.

The play, full of especially hilarious situations caused by the lies of all the
protagonists who try to pretend what they are not, It is directed and starring Jesús Castejón, the musical direction is in charge of Carlos Aragon, which stresses the uniqueness of the piece as a musical comedy what emparenta with musicals on Broadway and in Hollywood lived its golden age in years 40 last century.

So that the fun mess that is mounted reaches the best of ports, on the tables will be, besides Castejon (Frequently), a line-up of singers and actors of the first line like Gurutze Beitia (Caste), Martyn Estíbaliz (geek), Nuria Pérez (Charito), Adan Lopez (Ricardo, Charito boyfriend), Enrique Viana (i Love Lolo, the peevish and witty butler who knows everything and everything he sharpens), Raffaela Chacon and Mario Martin (Restaurant owners who feed the family of artists, which in turn they are parents of Ricardo, and that the circumstances lead them to pretend that they are the same Casto hosts and Casta), Angel Ruiz and Cecilia Solaguren (Fernando and Laura, Fernandito parents, boyfriend turn of Totó, and one of the elements by
those who the knot of lies does not stop growing), Jose Luis Martinez and Maria Jose Suarez (Euphonium and Magdalena, marriage of corrupt politicians), and Luis Maesso (Fernandito). Throughout the representation they will be accompanied by eight dancers, what, Likewise, They sing and act as the most.

The scenery is by Carmen Castañón, Ana Garay's wardrobe, lighting by Eduardo Bravo and choreography by Nuria Castejón. Enjoyment, definitely, is served.
"24 Hours lying!"It is a story of very special people in show business: the marriage of Casto and Casta, and two daughters, Charito and Totó. The family intends to lock herself in her house to rehearse a magazine that takes them from the bad economic situation in which they find themselves, but while they are held there make others believe that his absence is due to have toured America with his artistic company. And from there, Supine tangle.