The Teatro de la Zarzuela begins its season with “Granada: The short life and La Tempranica” 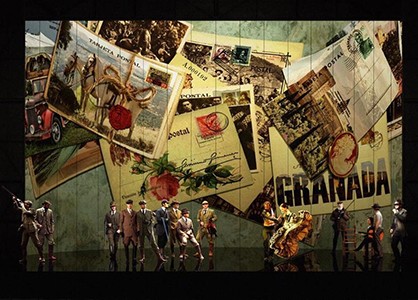 He Teatro de la Zarzuela will live next Thursday 1 October a night that is not an exaggeration to consider historical. After eight months without raising the curtain, bound by the disastrous ravages of an infinite pandemic, this unique setting will once again be the world center of the genre that gives it its name and containing many of the most brilliant pages of our lyrical heritage. And for such an extremely special moment, the scheduled show and who will raise it each day, it couldn't be less.

‘Granada’ is the generic title chosen to bring together two crucial compositions in the work of their authors. Granada is ‘La Tempranica’ by Gerónimo Giménez, and Granada is also ‘The short life of Manuel de Falla of which that is a direct musical and scenic reference. Historical will be the 14 functions (7 by title), also due to the prolonged absence of these tables: The train ‘La Tempranica’ has not stopped at this station for a whopping 36 years. ‘The short life’, eight.

And although, Due once again to the restrictions of the crisis, the montage will look different from how it was originally conceived. (both plays staged in the same function), the bet preserves the scenic and musical force of the original idea. Not in vain, heavyweights of music and theater are those who confront the genius of these two Andalusian composers: On the one hand it will be the Master Miguel Ángel Gómez-Martínez who assumes the musical direction from the podium of the pit (a Grenadian directing ‘Granada’), which will be in front of the Titular Orchestra of the Teatro de la Zarzuela -Orchestra of the Community of Madrid-, of the Titular Choir of the Theater of La Zarzuela and of some extraordinary casts.

And on the other hand, the venetian stage manager Giancarlo from Monaco will take over, as it is the norm, to remove the hidden feelings, hidden emotions, the unexpected passions; will squeeze the wounded soul of the characters, interpreters, of the public in search of truths on unknown and unhappy occasions, that none of us are alien.

With this production of ‘Granada’ Del Monaco concludes at the Teatro de la Zarzuela what he himself considers to be a spanish trilogy which includes ‘Las golondrinas’ -with which the season opened 2016/2017 of this coliseum-, and 'La Tempranica' and 'La vida breve' (the latter premiered in 2010 at Palau de les Arts Reina Sofia in Valencia, who owns the production). Focusing on the latter two, the first reflection of the Italian director revolves around what is the nexus that unites the works of Giménez and Falla, and "irremediably" comes to the conclusion that "both are linked by an atmosphere, a dramaturgy, a theatrical composition of the psychology of abandoned women”.

Gomez-Martinez, meanwhile, plunges into the emotions of the two composers and executes them with great fidelity so that they are through two gypsy women and grenadines -María and Salud- who move the public.

On stage you suffer, and a lot. And he also enjoys. That without a doubt. And there are artists to whom these dichotomous occasions make them grow, rise, transform into what the emotion demands at all times. As extreme as this is. Of that nature are the interpreters that these days, in these functions, they stop at the Jovellanos square. Of a moving scenic integrity, of a contagious drama and a different musical talent. Nancy Fabiola Herrera and Ainhoa ​​Arteta they will be respectively María in ‘La Tempranica’ and Salud in ‘La vida breve’, like Ana Ibarra y Virginia Tola. Jorge de León It will be that contradictory Paco from Falla's work, and will accompany you on paper Francesco Pio Galasso. Rubén Amoretti will play Don Luis in a, that will alternate with Javier Franco, and Tío Sarvaó in the other. Y Ruth González It will be Grabrié in Giménez's, Y Maria Luisa Corbacho He will also do double playing Salú in one and the grandmother in the other. And we don't stop counting. They will also make these montages an epic and always moving experience., voices and attitudes like those of Gustavo Peña, Gerardo Bullón, Ricardo Muniz, Miguel Sola, Anna Goma, Andres Merino Y Jesus Mendez.

And in ‘La Tempranica’, the wink is perfect. The National Prize for Dramatic Literature 2019, Alberto Conejero, has devised a dream. A fantasy that comes true in the prodigious meeting on stage of Gerónimo Giménez themselves, which will play Jesus Castejon, and Manuel de Falla, who will give life Carlos Hipolito. And the composers will have a replica in Julián Romea, author of the original bookcase of ‘La Tempranica’, what will the actor also play Juan Matute.

The musicologist Dácil González Mesa notes in his notes to the program that “certainly the two works that concern us here constitute different genres within stage music, but Falla's debt to Giménez's ‘La Tempranica’ is evident. A good example of this is that both have in common, in addition to its theme -set in the gypsy Granada-, types of characters, musical forms and resources ".

As has been customary at the Teatro de la Zarzuela for several seasons, both productions will be broadcast live on YouTube, Facebook and website Coliseum: ‘La Tempranica’ on Friday 16 October at 8:00 p.m., and 'La vida breve' a day later, Saturday 17 at the same time.

And all with the most extreme security measures.