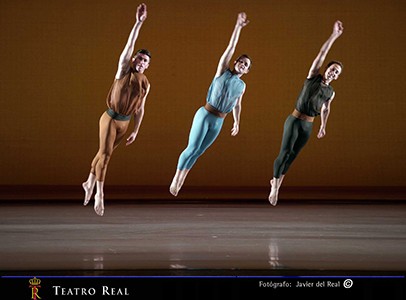 From the Municipal de Santiago-National Opera of Chile we get the choreographic version that Marcia Haydée performs of the classic Swan Lake performed by the Ballet de Santiago, that she runs

We recover another emblematic work of Antonio Gades, Blood Wedding, inspired by the homonymous drama of Federico Garcia Lorca, in which the dancer and choreographer gathers the essence of the tragedy, supported on the Andalusian temperament, masterfully performed by his company

North American choreographer Mark Morris seeks inspiration from the music of Händel and in the tables of William Blake to create a beautiful choreography: The Allegro, The Penseroso and Moderate

Fuenteovejuna, based on the original of Lope de Vega, turn the Golden Age into opera with the music of Jorge Muñiz and the script of Javier Almuzara, world premiere in a magnificent production that opened the season of the Oviedo Opera in 2018

The great romantic drama, Lucia de Lammermoor, will arrive on the platform at the weekend from the Gran Teatre del Liceu in Barcelona, with a luxury cast led by Elena Mosuc and Juan Diego Flórez

We remind you that, To access all the contents of MyOperaPlayer for free, all you have to do is register the link www.myoperaplayer.com and enter the code OperaEnCasa.

With the upcoming celebration of International Dance Day, next Wednesday, 29 of April, MyOperaPlayer wanted to open a special window to this artistic expression with the presentation of three very different shows that show from the slender elegance of classical dance, with Swan lake, to the racial expression and strength of Spanish dance, in Blood Wedding, to the subtle lightness of the contemporary form of The Allegro, The Penseroso and Moderate.

The artistic director of the Santiago ballet From Chile, the Brazilian Marcia Haydée, offers us a version of the famous ballet Swan Lake in which the wicked sorcerer Rothbart takes on a special role, equating their presence on stage to that of the "double" protagonist couple and achieving a novel reading of the story that has captivated the entire world since its appearance in 1895. The Chilean César Morales in the interpretation of Sigfrido, the Brazilian Andieza Randisek in the double challenge of Odette / Odile and the Chilean Rodrigo Guzmán playing Rothbart, They compose a virtuous protagonist trio wrapped by a company that is going through a magnificent technical and artistic moment..

In 1974 the stage of the Olympic Theater in Rome hosted the world premiere of what would be one of the great choreographies of the mythical Antonio Gades, Blood Wedding, with which the dancer and choreographer wanted to pay tribute to the poet Federico Garcia Lorca, to which they united ethical and political positions, and the use of folklore and traditions of Spanish popular culture as a source of artistic inspiration. The tragic feeling of the Andalusian people, the strength of Spanish dance and the flamenco essence are amalgamated in a work that interprets and further enhances the work of the Granada-born author. In his conception, Gades delivers everything by composing a narrative, almost filmic, that has not stopped being interpreted by everyone since its birth, turning Blood Wedding on the banner of the Spanish dance.

The Allegro, The Penseroso and Moderate, choreographer Mark Morris recreate 32 scenes inspired by paintings by William Blake, about music georg Friedrich Handel. Morris draws an expressive work, with predominant presence of the group through a choreography marked by vital and spontaneous steps that walk from the initial melancholy towards the contagious energy, where the collective predominates over the individual, convincing him of the full joy that the human being feels when he is part of something.

In September 2018 the Opera Oviedo assumed, probably, one of his bravest challenges with the world premiere of opera Fuenteovejuna, first own production of the Asturian theater, with music Jorge Muñiz and libretto Javier Almuzara based on the original by Lope de Vega, whose publication then celebrated its 400 anniversary. An entirely Spanish artistic team in which luxury names from the scene of our country participated, led by Miguel de Arco in the direction of scene, in collaboration with Paco Azorín in the sets and Sandra Espinosa in the sets, to name a few.

Functions Lucia de Lammermoor, de Gaetano Donizetti, at Gran Teatre del Liceu, were the perfect occasion for the tenor Juan Diego Florez The difficult role of Edgardo will debut. This great melodrama woven with impossible loves, betrayals, ancient clashes and death, contains one of the best-known arias in the history of lyrics at the time of its protagonist's madness, interpreted this time by Elena Mosuc.

The production of Damiano Michieletto, directed musically by Marco Armiliato, recreates a nude environment of excess, dominated only by the sharp, cold glass of a tower, which is both a place of celebration and death.

My Opera Player was launched by the Teatro Real in November 2019 and it has had the technological participation of Telefónica and Samsung and the sponsorship of Endesa.

#QuedateEnCasa, the Royal Theater stays with you.

Municipal of Santiago-National Opera of Chile

Founded in 1959 with the name of Modern Art Ballet, he Santiago ballet is the only professional classical dance company in Chile. His command of the classical repertoire, his close relationship with contemporary choreographers, the quality of its artists and the experience of its teachers, the Santiago Ballet is one of the most important companies in Latin America.

Since 2004, the company is run by Marcia Haydée, considered one of the most important dancers of the 20th century. Hers is the choreographic version of this production offered by MyOperaPlayer, with scenery and costumes by Pablo Núñez and lighting by Ricardo Castro.

Released in 2009 by the Royal Ballet of Flanders, Swan Lake by Marcia Haydée gives a novel reading to history. in which the Rothbart character, so often relegated to a secondary place, acquires special importance, joining the "double" couple of lovers as one more protagonist.

The Chilean Cesar Morales in Siegfried's interpretation, the Brazilian Andieza Randisek in the double challenge of Odette / Odile and the also Chilean Rodrigo Guzmán embodying Rothbart, They compose a virtuous protagonist trio wrapped by a company that is going through a magnificent technical and artistic moment..

The music is performed by the Santiago Philharmonic Orchestra, under the musical direction of Roberto Rizzi Brignoli.

In 1974 premieres at the Olympic Theater in Rome Blood Wedding, choreography of Antonio Gades with which he wanted to pay tribute to the poet Federico García-Lorca, to which he was joined by ethical and political positions,and the inexhaustible source of inspiration that emanates from Spanish popular culture.

Gades, in collaboration with Alfredo Mañas in the ballet adaptation of the literary work, It structures the work into six scenes throughout which the tragedy is described with an expressiveness and plasticity that indicate, emphatically, the dancer's personality. Devoid of artifice, combines the languages ​​of dance, but also from the other arts, that explores and devours with curiosity, and extract the essence.

L’ALLEGRO, THE THOUGHTFUL AND THE MODERATE

The Allegro, The Penseroso and Moderate, is considered one of the most interesting choreographies of Mark Morris. Inspired by the pastoral ode of George Friedrich Handel (1685-1759) of the same title, the work is divided into two acts, in which he recreates 32 scenes inspired by paintings by William Blake.

The presence of the group predominates in this creation, the coral structure, marked by vital and spontaneous steps in the form of basic paths that walk from the initial melancholy towards the contagious energy, where the collective predominates over the individual, convincing him of the full joy that the human being feels when he is part of something.

Morris counts on this show with the presence of the sopranos Sarah-Jane Brandon Y Elizabeth Watts, the tenor James Gilchrist and low Andrew Foster-Williams, Who, next to Headlines Choir and Orchestra of the Teatro Real, Handel under the direction of the teacher Jane Glover.

In September 2018 the absolute premiere of an opera based on one of the masterpieces of the Spanish Golden Age took place at the Oviedo Opera, Fuenteovejuna, from Lope de Vega, that raises perfectly transferable questions to today's society: the solidarity force of a social mass under the repression of established power and corruption and serves as a tribute to the 400 years after the first publication of this masterpiece.

With this starting point, the composer Jorge Muñiz, with the collaboration in the script of Javier Almuzara, conceives a work with very active rhythm music, shows many different traditions and genres but connected in a very organic way, with references to today's popular trends, like motown, el jazz or el hip hop.

The stage bet is based on some of the most important names in the theater of our country, headers Miguel del Arco (for the National Theater Prize) which had the collaboration of Paco Azorín in the stage design, Sandra Espinosa in costume design, Juanjo Llorens in lighting and Pedro Chamizo in the design of projections.

Juan Diego Florez debuted the role of Edgardo in Lucia of Lammermoor in November 2015, at Gran Teatre del Liceu, with this production of Damiano Michieletto directed musically by Marco Armiliato and the soprano Elena Mosuc in the leading role of the opera.

Truculent based on historical novel by Walter Scott, The Bride of Lammermoor, what Salvatore Camarano transformed into a script for Gaetano Donizetti, who composed the opera in just a month, Lucia di Lammemoor expresses romantic love that endures beyond lies, of misunderstanding, of madness and death. Located in Scotland, the rivalry between two enemy clans is the stage that sees the love between Lucia and Edgardo, who swear in secret marriage vow. The protagonist, Lucy, It is one of the great challenges of the operatic repertoire, both vocal and scenic, and which is known for one of its high points, when the character is delivered to madness.

The stage proposal offered by the Liceu, directed by Damiano Micheletto and premiered at the Opernhaus Zürich, recreate an environment “naked of excesses, dominated only by the sharp, cold glass of a tower, which is both a place of celebration and death”, in the words of the stage director.