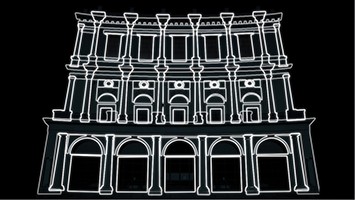 Next Saturday, 10 of May, to 22 hours, he Teatro Real will hold the eighth edition of the European Opera Days with an impressive visual spectacle in three dimensions on its facade of the Plaza de Oriente, made with the mapping technique, which locals and tourists can enjoy for free.

This new form of artistic creation will turn the exterior of the Theater into a virtual stage, in which the facade will come to life to make a journey through the history of opera, with a creative play of light and sound, where each stone of this emblematic building of the city will become animated to make us enjoy an unforgettable moment.

At the end of the show, he Coro Intermezzo, Titular Choir of the Teatro Real, will close the day with an open-air performance of one of the best-known moments of opera.

The mapping has been created by the company Triick, specialized in the organization of videomapping, activity consisting of designing virtual animations in three dimensions, accompanied by lighting and sound effects, adapted to the special architectural characteristics of the building. Thus, large static elements lose their rigidity and become a living and ductile work of art, which can be enjoyed by the public of all ages.

For the realization of this show, almost a month has been needed to measure and analyze the facade of the Royal Theater, to know in depth its details and corners, and get the synchronization between the audio and video components to be perfect.

The European Opera Days will be held this weekend in the main cities of the continent, with the purpose of disseminating among all citizens the culture of opera. In Madrid, the Royal Theater show has had the collaboration of the City Council, Telefonica and Trick.