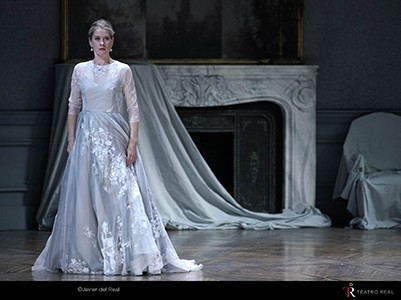 Among the scheduled events will take place the virtual delivery of the Opera XXI Awards, to 19.00 hours, that this year they celebrate their second edition, and whose ceremony can be followed in My Opera Player.

Opera Europa will offer live broadcasts from the five continents in the most important theaters in the world and with well-known voices from the world of opera that will put their art on a day marked by the difficult challenge imposed by the pandemic.

The next sunday, 25 October, the second edition of the World Opera Day, a commemoration that seeks to promote the cultural value of this genre, pay tribute to creators and performers and highlight their importance as a sector of special relevance in the economy.

The initiative, created and powered by Teatro Real with the support of Ópera América, Opera Opera Latin America and Europe, has the backing of important institutions such as Opera Canada; Meeting of Operas of France (France); Opera XXI (Spain); Opera & Music Theatre Forum (United Kingdom); the International Theater Institute (YOU) and the National Centers for the Performing Arts in China and India.

This year, marked by restrictions and the special situation created by the pandemic, the celebrations will have their epicenter in Opera Vision, Opera Europa audiovisual platform, which will include live broadcasts from the five continents starting at 7 in the morning in Tokyo and then visit Moscow, London or New York.

Through My Opera Player, he Teatro Real will advance two days to the official date to offer open, throughout Friday 23 October, one of the great titles of the season 18/19, Capriccio, last opera of Richard Strauss, with musical direction Asher Fisch and a brilliant production conceived by Christof Loy, winner of the prize for the best Stage Direction Opera XXI.

He Saturday 24 the stage of My Opera Player will make available to users, also for free, Aida, de Giuseppe Verdi, in the monumental production of Hugo de Ana under the baton of Nicola Luissotti, Principal Guest Musical Director of the Teatro Real and Award for Best Musical Director Opera XXI for Turandot at the Theatre Royal.

Tanto Christof Loy, which is currently preparing a new production of Rusalka for the Madrid Coliseum, as Nicola Luisotti, responsible for the musical direction of the opera A masked ball that inaugurated the current season of the Royal Theater, will participate in the virtual delivery of the second edition of the Opera XXI Awards, which will take place on Sunday 25 that can be followed in streaming in My Opera Player and on the Operavision platform to 19.0 hours.

The virtual ceremony, conducted by Daniel Bianco, director of the La Zarzuela Theater, and by stage director Bárbara Lluch, will feature the performance of two of the awarded artists, Sondra Radvanovsky and Leonor Bonilla, and the pianist Rubén Fernández Aguirre. They will be joined by the words of the Minister of Culture, Jose Manuel Rodriguez Uribes, and the president of the association, Oriol Aguilà, director of the Castell de Peralada International Festival. The event will also feature the interventions of great Spanish singers such as Ainhoa ​​Arteta, Carlos Alvarez, Ruth Iniesta, Session Hernández, Ismael Jordi, Xavier Sabata, Jorge de León, Nancy Fabiola Herrera and Sabina Puértolas.

Honorary Awards, appointed in Assembly by all Opera XXI members

He 27 May 2019 he Teatro Real presented, for the first time in his scenario, Capriccio, last opera of Richard Strauss, with it he reaffirmed his repertoire expansion project through a masterpiece, the composition and content of argument beyond the artistic value to invite the eternal debate about opera: What is more important, the word or music?

The German stage director Christof Loy, expert on the work of Strauss, addressed for the first time the interpretation of this complex work in which, while upholding the central theme, I discovered the multiple layers that outline the secrets hidden in the soul of each protagonist, concerns and motivations derived from human emotions to the perception of beauty.

The musical director Asher Fisch, expert baton on the music of Strauss, He was in charge of a cast that featured the voices of the soprano in the main roles Malin Bystrom (Countess Madeleine), baritone Josef Wagner (Conde), the tenor Norman Reinhardt (Flemish), baritone André Schuen (Olivier) and low Christof fish eaters (The rock), among others, Next to the Head of the Royal Theatre Orchestra.

With almost 300 ─entre solo artists, choir, dancers, orquesta─ actors and scenery and historical and, Aida was returning to the Royal Theater on 7 March 2018, with great production conceived by Hugo de Ana for the opening of the second season of 'new' Teatro Real, in October 1998, which he unveiled to the public the enormous dimensions and exceptional technical capabilities of his new stage.

Hugo de Ana opts for a production of strong symbolic power, dominated by a colossal pyramid suggests the magnificence of political power and religious, opposed to desert landscapes that emphasize the profound loneliness of the characters, torn between feelings, doubts and contradictions.

The musical direction had one of the great Verdian experts, the teacher Nicola Luisotti, principal guest musical director of the Teatro Real, who, at the head of the Titulares Choir and Orchestra of the Royal Theater he was in charge of a brilliant cast headed by Liudmyla Monastyrska in the titular role; Violeta Urmana, as Amneris; Gregory customer, in the skin of Radames; y George Gagnidze, as Amonasro, along with the rest of the cast.