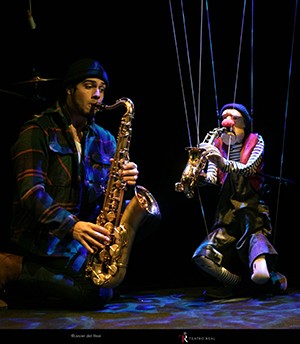 Lthe piece rescues the story of the clown Totolin and its author, Hermenegildo Lanz, as well as the connection of four generations through theater, art and music

The public has more information about the show on the Teatro Real website through the following link: Totolín didactic guide

Totolín -entredós- is the last show of Puppets Etcétera, the veteran Granada company, National Theater Award for Children and Youth

The play, combining musical language and puppeteer, it's a tribute to august clowns like Charlie Rivel, Grock or the Rudi Llatas and their naive and deep humor at the same time

Royal Junior, in the Sala Gayarre, It will be the meeting point for the family audience the days 5, 6, 7 Y 8 from December in double session, to 12.00 and to the 17.00 hours, with the company of puppets Etcetera, who returns to the Royal Theater with a story full of tenderness, with friendship at the center of the narrative, to talk about the ability to excel and the struggle to make dreams come true, and it is also a tribute to the circus world and to august clowns like Charlie Rivel, Grock or the Rudi Llata, Totolín-Entredós.

Conceived for an audience from 6 years, the scene combines the languages ​​of music and puppetry, always in search of the complicity and smile that characterize Etcétera's proposals. With Enrique Lanz at the head, the team composed of Yanisbel Martínez, Leo Lanz, Mrs. Martínez and Laura Renieblas drag us to fiction to make us be part of it.

The piece rescues the real story of the Totolín clown and its author, Hermenegildo Lanz, as well as the connection of four generations through theater, art and music. In the words of its director, Enrique Lanz: “During the process of creating the show, we realized that our ideas were materialized in the character of Totolín, a puppet made by my grandfather, Hermenegildo Lanz, in the forties of the last century.

On stage, a musician and a clown strike up a friendship full of adventures in a circus in which they will turn red noses and play the saxophone in duet. Topics such as the ability to excel and the struggle to make dreams come true are combined with musical and puppetry languages, appealing to smile and family enjoyment.

Music, created for this work, performed live with various instruments - primarily piano and saxophones- and it is the thread that sews the relationships between the characters. It has been composed by Leo Lanz, who also interprets it live. Sara Martínez improvises with Leo some song, also playing the accordion and the piano.