The Royal Theater in China 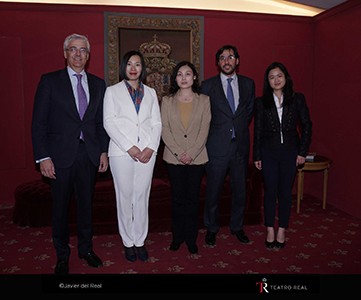 He Teatro Real strengthens its presence in China with the signing of an important collaboration agreement with the National Centre for the Performing Arts (NCPA), the brand new performing arts center opened in 2007, It is maintaining since a dynamic and eclectic artistic programming in its three rooms, with capacity for more than 5000 people.

The two institutions are working on various collaborative projects, ─ both broadcasts audiovisual productions Teatro Real in China─, as exchange of production and possible co.

As part of this agreement will be held during June 40 projections of two productions of the Teatro Real ─Le nozze di Figaro Y Madama Butterfly─ in 10 major Chinese cities in the programming of the third edition of International Opera Film Festival 2018, sponsored by the NCPA, They involved in the most important opera houses, as the Metropolitan Opera House in New York, the Royal Opera House in London and the Mariinsky Theater in St. Petersburg.

Royal Theater also offer in their rooms, the next fall, NCPA projections productions, including Western operas and traditional Chinese opera.

Likewise, he 30 of June, coinciding with the 45 anniversary of the establishment of diplomatic relations between China and Spain, The NCPA will screen in its main hall show Carmen, Teatro Real production and Antonio Gades Foundation, at Day Spanish culture.

With these works, which will be shown with Chinese and English surtitles, viewers can see three centuries of opera through some of the most representative and attractive titles of operatic repertoire.

two masterpieces of the great dancer and choreographer will also be offered Antonio Gades, author of the shows Fuenteovejuna ─basado on the novel of the great writer Lope de Vega– Y Carmen, inspired by the famous Sevillian cigarrera through the eponymous opera.

On the other hand, for Chinese citizens can better understand the Teatro Real, its building and its history, increase the Guided visits Chinese and also offers the possibility to perform with audio guide in Mandarin Chinese.

These initiatives join many others that the Royal Theater is underway to increase cultural exchanges with China, driven by the firm, in December 2016, agreement incorporating the Real Silk Road International League of Theaters (International League of American Theaters of Silk Road), a platform created by the Chinese government to promote artistic exchange between China theaters and other member countries, a total of 56, among which are the United States, Russia and France.

Also noteworthy is the participation of the Royal Theater in the Chinese social network WeChat, created seven years ago, and currently it has more than 800 million users. Thanks to joining this platform, Royal Theater has opened a door to the Chinese community to access its programming and discover the exciting repertoire of opera, zarzuela and ballet in the great western China.