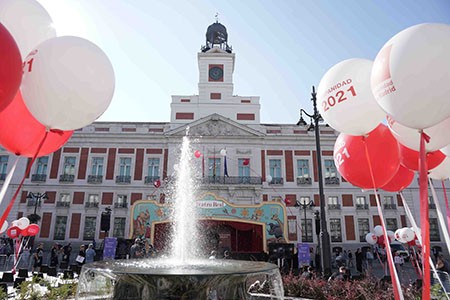 He Teatro Real participates, for the first time, in the commemorations of the Columbus Day with a lyrical recital in his traveling float, protagonizado por la soprano Sylvia Schwartz and tenor Ismael Jordi, Who, accompanied on the piano by Rubén Fernández Aguirre, they are interpreting an attractive program, popular and varied, conceived for the occasion, featuring well-known arias and opera and zarzuela duos.

The float is located on the facade of the headquarters of the Community of Madrid, at the Puerta del Sol, where have they been placed 200 chairs, that the spectators will be able to occupy in strict order of arrival.

Created for the parade of the Three Kings Parade of Madrid in 2020, the float of the Teatro Real measures 16 meters long by 5,80 meters high, it is two stories high and weighs about five and a half tons. Simulates the stage of a theater - with its embouchure, backdrops and backdrops - and it has been built from the transformation of a trailer truck like those usually used for the transport and storage of scenography, props and costumes for operas. Su interior puede adaptarse para distintas escenografías, screenings or exhibitions, according to the needs of each event or performance.

This stage alive, with the capacity to take shows and concerts of different formats to the entire Spanish peninsular territory, is one of the initiatives framed in the program 'Royal Theatre – Near you' approved by the Council of Ministers as an ‘Event of Exceptional Public Interest’, effective from the current season to the 2022-2023.