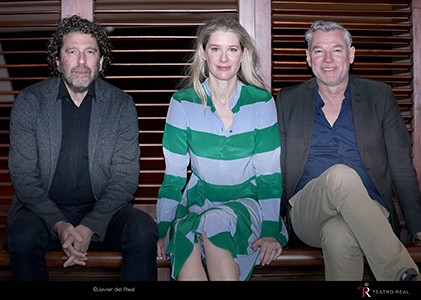 The next 27 May the Teatro Real will present, for the first time in his scenario, Capriccio, last opera of Richard Strauss, of which nine functions will be offered in a new production conceived by the stage director Christof Loy, co-produced with Opernhaus Zürich.

The musical director Asher Fisch, expert baton on the music of Strauss, He will lead an ensemble cast in the lead roles will the voices of soprano Malin Bystrom (Countess Madeleine), baritone Josef Wagner (Conde), the tenor Norman Reinhardt (Flemish), baritone André Schuen (Olivier) and low Christof fish eaters (The rock), among others, Next to the Head of the Royal Theatre Orchestra.

With this release, the Royal Theater continues its expansion project repertoire and offers a masterpiece, the composition and content of argument beyond the artistic value to invite the eternal debate about opera: What is more important, the word or music?

Capriccio It arises from an original idea writer Stefan Zweig, who discovered a short opera by Antonio Salieri and Battista Casti, Before the music and then the words, around this issue, and suggests to the composer the creation of a new work inspired by him. Strauss, In collaboration with Clemens Krauss, It delves into this adventure and prepares a script loaded with irony, wit and intelligence in which, key comedy, It proposes a reflection, the importance that should be the word opera in relation to music.

A) Yes, while the Western world was plunged into the horrors of World War II, in the heart of Nazi Germany, Richard Strauss moves away from the reality-not in vain opera is set in a castle in Paris 1775 to tell the story of Countess Madeleine, a cultured and refined aristocrat, unable to decide before the love of her two suitors, a poet and a composer. The birthday celebration originates creation of a skit, in which both artists participate, and give rise to an intellectual and philosophical debate, not without humor, around the fundamental question of the predominance of music over the word in musical theater.

The German stage director Christof Loy, expert on the work of Strauss, is launched for the first time to the interpretation of this complex work in which, while upholding the central theme, Multilayer discovers that outline the secrets hidden in the soul of each player, concerns and motivations derived from human emotions to the perception of beauty.

The central character Capriccio It is the Countess, a woman of great sensitivity that reflects the indecision before the election of one of its two suitors, the need to define the values ​​and affections that will determine the rest of your life. At that momentous time in which the action, his birthday, Madeleine, to the ubiquitous mirror their classroom chairs, look at the present with the awareness that will soon be gone, as the girl who was, and it is in transit to the future.

music workshops for the whole family. This month: Today we caprice.

Concert by soloists of the Orchestra of the Teatro Real Titular around Richard Strauss and Robert Gerhard.

Everyday, 45 minutes before the start of the function.

Chamber music by Richard Strauss with creations of some of his contemporary colleagues: Korngold, Krenek, Zemlinsky, Pfitzner o Schreker.

Memory of a 'Capriccio': Stefan Zweig and the Jewish exodus to America.

literary evening Dedicated to Spanish literature. A tour of the Museum that mixes pieces from the Lázaro Collection and fragments of texts and poems by writers such as Lope de Vega Y Gertrudis Gómez de Avellaneda.

minimum of 15 people and maximum of 25. inscriptions info@museolazarogaldiano.es