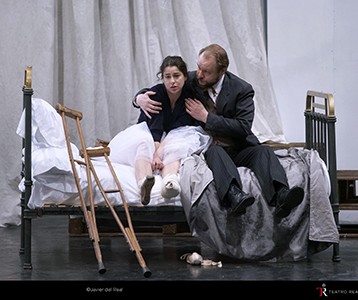 Between days 12 Y 27 of November Royal Theatre offer 10 functions from Rusalka, from Antonin Dvorak, in a new production The Royal Theatre, co-produced with the Säschsische Staatsoper in Dresden, the Teatro Comunale Bologna, the Gran Teatre del Liceu in Barcelona and the Palau de les Arts Reina Sofía in Valencia, in which it will be presented after its premiere in Madrid.

Rusalka, premiered in Prague in 1901, was the penultimate of eleven operas by Antonin Dvorak (1841-1904) Y, definitely, the most famous of all those he composed.

the libretto, of the poet and playwright Jaroslav Kvapil, is based on the Central European legend that inspired the book Undine (1811) from Friedrich de la Motte Fouqué and in the story The little Mermaid (1837) from Hans Christian Andersen, in which a water nymph decides to leave her aquatic world at any cost to pursue the prince she loves.

the score, in which the influence of Wagner and the currents of Central European musical nationalism subtly beat, different intertwines leitmotiv and bohemian folklore themes, with a different orchestration to represent the world of nature and spirits -with greater harmonic richness and a diaphanous and delicate timbral palette- and the world of men, with a more conventional and obscure instrumentation.

The stage manager Christof Loy bridges these two seemingly irreconcilable universes, delving into feelings, passions, wishes and contradictions of the characters, what, in a ghostly atmosphere, they go from life to stage, in a production that is a profound tribute to theater as a territory of catharsis and sublimation of emotions.

The Kingdom of Waters -with Rusalka, on the author Padre Vodník, the seasoned sorceress Ježibaba (turned into his mother) and the nymphs, her sisters- hides complex and conflictive relationships between the characters that, in Loy's conception, they transform into a strange and forgotten theater family with a glorious past, whose members, like specters, they live on nostalgic memories, but also illusions. And in that closed space, decadent and evocative conceived by the set designer Johannes Leiacker, with lighting of Bernd Purkrabek and wardrobe Ursula Renzenbrink, everything moves with the dream of a lame dancer in love, who aspires to reach heaven with his pointe shoes and the transforming power of love.

He Choir and the Titulares Orchestra of the Royal Theater they will perform this opera for the first time, who returns to the stage of the Real after 96 years of absence and about to meet the 120 anniversary of its creation.

Of the 15 October to 17 from December | International Institute

Film Series: at the end of the years 40 and during 50 twentieth century, producers, directors, scriptwriters, actors, Hollywood musicians were the subject of a spectacular persecution that deeply affected the film industry. This cycle, with films in English subtitled in Spanish, collect some titles that suffered that witch hunt.

Free activity upon registration in www.iie.es

Interpretation of songs from the cycle Love Songs Op. 83, by Antonin Dvořák, by soprano Juliette Mars and pianist Mack Sawyer.

Face-to-face assistance with limited capacity and live broadcast by the Youtube channel of the Royal Theater.

Conference in streaming: American musicologist David R. Beveridge, specialized in the work and life of Dvořak, will offer a conference via Zoom on the Czech composer, his origins, his sources of inspiration and his influence on music.
Free activity at madrid.czechcentres.cz

From the 13 of November, 19:00 hours | National Museum of Decorative Arts

Storytelling in streaming: under the title Moon water, the public from 9 years you can celebrate your particular Friday 13 and enjoy a tale with ghosts, a swamp of deep and mysterious waters and a prince in love with a magical girl. A story of impossible loves and witches.
Free activity in www.museoartesdecorativas.es and on his YouTube channel.

Guided tour: the palace of the Counts of Osorno in Pasarón de la Vera (Cáceres) opens its doors exclusively for, in groups of six, know the legend that encloses its walls and that, like in Rusalka, tells a story of impossible loves.
Free activity upon registration. More information admin@itineracarolusv.eu

At 120 anniversary of the premiere of Rusalka, the soloists of the Titular Orchestra of the Royal Theater will offer a program around Antonín Dvořák.

Antonin Dvorak: Terzetto and Do Mayor. 74 for violins and viola

Literary gathering: Alix E. Harrow, author of A Witch’s Guide to Escape: A Practical Compendium of Portal Fantasies, with which he won the Hugo Award, will offer a lively talk in English via Zoom to talk about witchcraft, libraries and books in which the public can freely participate.
Free activity upon registration in www.iie.es

Storytelling: the renovated Naval Museum opens its doors to host a fun and unique activity for children between 3 Y 7 years, in which the story of the nymph Rusalka will be told. The act, that will be face-to-face, it has a capacity limited to five people.
Free activity upon registration in www.armada.defensa.gob.es/museonaval

Storytelling: the expert narrator Alba Muñoz will give voice to the story of The little Mermaid, by Hans Christian Andersen, a masterpiece from which Dvořak was inspired to compose his opera Rusalka. An activity for children from 8 years that will transport you to a magical world.
Free activity with prior reservation at www.culturaydeporte.gob.es/mromanticismo

Conference in streaming: the writer Alix E. Harrow will meet virtually with the public to discuss witchcraft and the female vote, main themes of his new novel The Once and Future Witches. The act, what will be in english, will address the fight for witches' rights in the suffrage movement.
Free activity upon registration in www.iie.es

Guided tour: a unique and exclusive tour to know the halls of Greece from the hand of a specialized guide, where the attending public can discover the many mermaids, nymphs and other fantastic beings that populate some of the pieces in the museum's collection.
Free activity with reservation of place. More information www.man.es

Everyone to the Gayarre!: music workshops for the whole family, direction and presentation of Fernando Palacios. Story of a mermaid.

A nymph bewitches with her songs whoever approaches the lake.