The Royal Theater opens season with Don Carlo, in Verdi 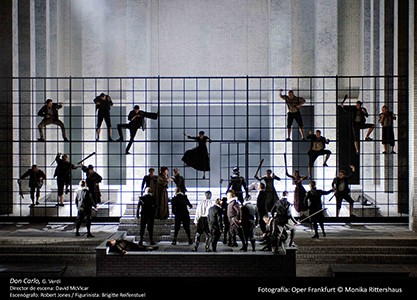 Between days 18 September and 6 October, Royal Theatre offer 14 functions from Don Carlo, from Giuseppe Verdi, inaugurating su season No. 23 since the reopening.

Don Carlo, 23Th of 26 Verdi operas, It is the longest of its catalog and which underwent more revisions: in a span of almost 20 years, from 1867 a 1886, the composer wrote different versions trying to find the dramaturgical and musical balance of the score, I was affected, since its genesis, by the impositions of the theaters.

Verdi resumed his recurring themes ─ the struggle between inner feelings and political duty, the desire for freedom from oppressive power, revolutionary ideals, forbidden love, the parent-child relationship, friendship, etc.─ through sensitivity and romantic momentum Friedrich Schiller, which she had already inspired three previous operas: Giovanna D'Arco, I Masnadieri Y Luisa Miller. From his drama dom Karlos, Infante of Spain, the composer returns to approach the Spanish universe, with varying degrees of success, He imbibed four titles in its catalog: Ernani, The Troubadour, Simon Boccanegra Y The force of Destiny.

Written for the Paris Opera, where he triumphed grand opera, with its bombastic charges (historical themes the mythological, large choral and symphonic masses, ballets, etc.), the first version of Don Carlo, with original libretto in French François Joseph Mery Y Camille du Locle, It was released in 1867, with great pomp and pageantry, including the presence of the French royal family.

Annoyed with the impositions of the Paris Opera and disgusted with the various adaptations and versions of the opera in Italian, Verdi decided to reduce the duration of the work to facilitate their dissemination and prevent each theater cut off the score at will: born so called 'Milan version’, from 1884, in which the first act deleted, ballet, etc. This version in four acts, more short, more agile, but weaker dramaturgically, which it is presented at the Royal Theater 2001 and in 2005, with staging by Hugo de Ana.

Two years after the release of version four acts, Verdi revisits the score restoring to the first act, called Fontainebleau, to give a greater consistency to the work dramatúrgica, because in it the historical context and the network of relationships between the characters that foster the evolution of the drama is shaping up. Thus was born the so-called 'Modena version’, from 1886, five acts without ballet, which you can now see at the Royal Theater, with staging David McVicar, He addressed in previous seasons Another twist (2010), La traviata (2015), Rigoletto (2015) Y Gloriana (2018).

In a monumental decorated, icy, oppressive and symbolic of Robert Jones ─ which 'materializes' the enormous weight of religious and political power that characterized the reign of Felipe II─ succeed fluently different spaces in which the plot unfolds, whose era is evoked by the sumptuous costumes designed by Brigitte Reiffenstuel.

And production Gloriana, Benjamin Britten, acclaimed 2018, McVicar, Jones Y Reiffenstuel They manage to create the right atmosphere for psychological introspection of the characters, what, in Don Carlo, reflect, more than in other Verdi operas, complex and contradictory feelings, with ethical implications, moral and sentimental to them away from the dichotomy between good and bad of previous titles.

*Marcelo Puente Y Sergio Escobar will perform the title role of Don Carlo Francesco Meli instead of, He has canceled his participation in the opera sick duly accredited.

Of the 10 September to 6 October | Teatro Real, Foyer

Exposure facsimile Hours of Charles V, recently restored, in the foyer of the Theater anticipating the splendid exhibition of the original manuscript National Library from 10 October.

Spanish fashion Golden Age: themed tour of the most striking aspects of the aesthetics of the sixteenth century Spanish fashion, through paintings, jewelry and textiles.

From 20 of September | Naval museum

Visit workshop: The universe of the Habsburgs from the point of view of the naval world of sixteenth and seventeenth centuries.

Live broadcast from Don Carlo in Classical Radio, the RNE, and stations that make up the EBU, European Broadcasting Union.

Emperor concert series: visit to the monastery of Yuste and a concert in its Basilica with music of the sixteenth century in honor of Emperor Charles V.

Chamber Sundays I: the Soloists of the Titular Orchestra of the Royal Theater will offer a concert to contextualize the opera Don Carlo and its composer, Giuseppe Verdi.

El Escorial, dreams of a universal library: Maria Jesus Viguera, numerary of the Real Academia de la Historia, analyze the Arabic manuscripts of El Escorial and the reasons why the collected Felipe II.

Spain in times of the Austrias: a tour of the rooms of the modern age to discover the Spain of the Austrias and historical reality behind the argument Don Carlo.

Touching story: A prince Profile: a visit to the museum vault through a famous medal with portrait of Prince Don Carlos, starting point to get into the sociocultural context of the court of Philip II.

Everyone to the Gayarre!: The Garden of Earthly Delights: music workshops for the whole family, direction and presentation of Fernando Palacios. This session, the family of King Philip II explains the picture of Bosco.

A miniature museum: Hours of Charles V: made in a Paris workshop to 1500, one of the most important manuscripts of the National Library will be exposed for the first time to the public, accompanied by four other pieces from the BNE own.