The Royal Theater gets four nominations for the Awards Opera 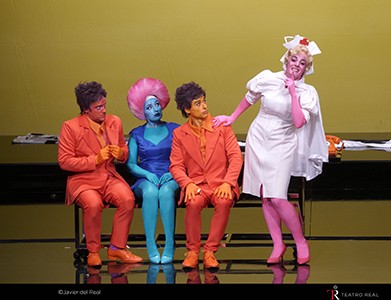 In May 2018 the Teatro Real also earned four nominations: best Coro, Best Opera Company, Best Play Recovered (Bomarzo) and Best New Production for Billy Budd, getting the first prize for the latter, directed on stage by British Deborah Warner, with international recognition for unforgettable opera by Benjamin Britten, talisman composer who last year made Gloriana in one of the favorites to the awards, with musical direction by Ivor Bolton, and scenic by David McVicar.

The International Opera Awards were created in 2012 by the British magazine Opera, and from the beginning you were considered the Oscars of the world of opera. With them we want to annually award the best in the world of lyric (productions, singers, directors, theaters, orchestras ...), thus publicly recognizing its protagonists, and supporting the training of new talents through scholarships financed with the profits obtained at the gala.

The Head of the Royal Theatre Orchestra is, nowadays, one of the formations best valued by the great musical directors of the moment for its professionalism, versatility and delivery, whose musical values ​​have garnered critical acclaim and public applause, after demonstrating his acting skills in titles from Mozart to Wagner, de Verdi and Janáček, of the British and Zimmermann..

I'm narcissistic, comic opera by the Spanish composer Raquel Garcia-Thomas, libretto by Helena Tornero, in which it is alleged, humorously, delusional narcissism prevailing in today's society, is one of the favorites. With musical direction by Vinicius Kattah and stage by Marta Pazos, the opera featured the performance of the sopranos Elena Copons and María Hinojosa, the baritone Toni Marsol, the tenor Joan Ribalta and the Titular Orchestra of the Royal Theater. An exciting project with an essentially young and feminine team, who set up a story full of freshness and full of black humor in a project in which, for the first time, the Royal Theater and the Spanish Theater collaborated.

The DVD recorded at the Royal Opera House Street Scene, made in co-production with Bel Air Classiques and winner of the prestigious Diamant d'Opéra Magazine award last December, is one of the nominees for the Best Audiovisual Recording. Street Scene, Kurt Weill, production by the Teatro Real in co-production with the Cologne and Monte Carlo Operas, It was premiered in Madrid with musical direction by Tim Murray and with stage direction by John Fulljames, who recreated the atmosphere of the years 40 New Yorkers, and Tim Murray musical.

The International Opera Awards also recognize the work of great voices of the lyric among whose nominations include names that were part of last season, and also of the current, as Maria Agresta, Lisette Oropesa, Javier Camarena, René Pape O George Petean.