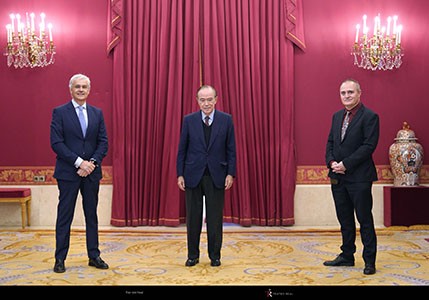 The stability of the Royal Theater, materialized in the ratification, in recent months, of its president, Gregorio Maranon, and its CEOs, artistic and musicalIgnacio García-Belenguer, Joan Matabosch e Ivor Bolton, respectivamente­, will allow the Madrid Coliseum to carry out an ambitious Strategic plan for the next 5 years (2021-2026).

its effective management model (with which he was able to face the pandemic), the independence of its governing bodies, the accumulated experience and the support of public administrations, sponsors and civil society have allowed it to design a project that consolidates the roadmap started in recent years and opens up new growth paths, especially in the field of digitization, Resource Optimization, expansion and loyalty of the public, education, inclusion, sustainability, accessibility and internationalization.

He artistic project directed Joan Matabosch, Widely supported and recognized nationally and internationally, will continue to expand the Teatro Real's repertoire with a wide-ranging program starring prestigious artists and favoring co-productions with the most important opera houses in the world. The articulation of repertoire operas with lesser-known masterpieces, world premieres and recovery of Spanish musical heritage, will continue to bring to the Real stage the interpreters, musical directors and stage teams most suitable for each artistic proposal.

Ivor Bolton, in the musical direction of the institution, seconded by Nicola Luisotti Y Pablo Heras-Casado, next to Andrés Máspero, in front of the choir, will continue their work together to the Choir and Orchestra Headlines of the Royal Theater, in a permanent and tenacious search for excellence, that unanimously praises national and foreign critics.

The public service vocation of the Teatro Real and its commitment to an ever-widening public, different, decentralized and inclusive, in which children and young people occupy a privileged place, backbone their five-year plan.

After the recovery of free visits to the Royal Theater after the break caused by COVID 19, the Guided visits will be reactivated with new models and routes, more attractive and diversified.

The Real Joven -with the last minute tickets, the Young armchair and the Youth Committee­, as well as the Young Friends of the Royal Theater, will also grow with the creation of the International Youth Council, that will unite opera lovers of different nationalities until 35 years, fostering fruitful links and synergies.

LÓVA (The opera, Learning Vehicle), project that was born in the Royal Theater in 2007 and which is already developing in more than 200 schools throughout Spain, returns to be supervised by the Royal Theater, that will give him a new impetus after the break caused by the pandemic and the death of his great mentor, Peter Sarmiento.

In the field of Training, supply will be increased courses for the public, university students, and professionals from the artistic world, highlighting the launch of a Online Teaching Platform of the Royal Theater.

Crescendo, created in collaboration with the Foundation Friends of the Royal Theater in the midst of a pandemic to facilitate the access of young singers to the professional world, will continue to consolidate with opera-studio projects that will integrate the programming of Royal Junior (Like the recent production of ashen) and launching other initiatives, as the training of repetitive pianists, which will start this season.

Within the framework of the Cerca de Ti program -approved by the Council of Ministers as an Event of Exceptional Public Interest and valid until 2023- different initiatives will be developed to spread opera and music, highlighting the roaming of the Royal Theater float, in coordination with the autonomous communities throughout Spain, and the installation of a screen, permanently, on the façade of the Plaza de Isabel II, which will divulge the cultural and artistic programming of Madrid (similar to those existing in the Plaza de Callao or Coliseum), giving special relevance to the contents and retransmissions of the Teatro Real.

It will continue the commitment of the Royal Theater with the accessibility of their shows, perfecting its 'Accessible Real Theater' app for viewers with visual and hearing disabilities, its magnetic loop system installed in the main hall and improving the mobility of wheelchairs inside the building.

One of the great challenges for the coming years is the environmental sustainability of the Royal Theater, based on energy efficiency, decarbonization, digitization of maintenance operations, Resource Optimization, modernization of equipment and implementation of renewable energies, with the aim of becoming a zero consumption building 4.0.

In the field of improvement of facilities and infrastructures, will be carried out renovation of the floor of the stage box of the Royal Theater, after 25 years of maximum and uninterrupted use.

He Arganda logistics center, that gives shelter to the productions and co-productions of the Teatro Real, will be modernized with digitization and automation of storage processes.

The use of new technologies will affect all areas and services of the Teatro Real for more efficient management, highlighting the creation of a digital historical archive, with the compilation and cataloging of all the material of historical and musicological interest, which will be available to scholars and researchers.

Hard work will be done on the international projection of the Royal Theater in its many aspects: co-productions with foreign theaters, rental of own productions, expansion of the catalog MyOperaPlayer, retransmissions and broadcasts in co-production with prestigious international television and platforms and communication campaigns to consolidate the notoriety of the Theater among the most important in the world.

The programming of the Real in 2019, recognized with the prestigious International Opera Award (one year late caused by the pandemic), had significant media coverage, which will continue with Gala to be held next 28 November on your stage. It will be the first time the awards ceremony has been held outside of England..

Real's work during the pandemic, only one in the world, has attracted the attention of the international press and has given great visibility to the Theater beyond the musical field, with a prominent presence in foreign media.